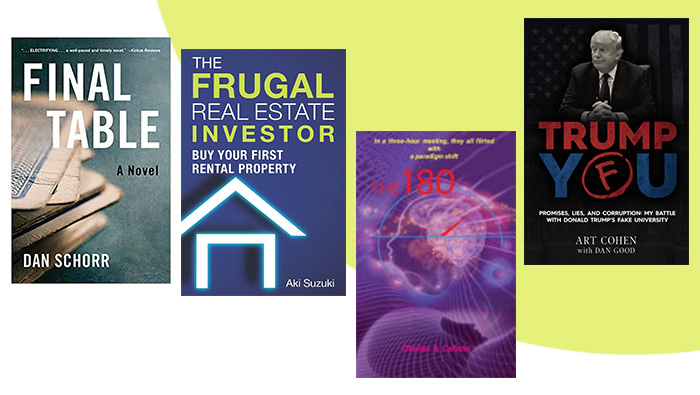 A political thriller about misconduct in the #MeToo era, one victim's battle to survive and overcome trauma and the cable news machine that feeds off the scandal coverage and inflammatory confrontation. The author brings firsthand experience as a New York City  crime prosecutor to tackle the world of political and media dysfunction.

Former White House staffer Maggie Raster's chaotic attempt to promote her new business as a television political analyst brings her to the broke poker champion Kyler Dawson's attention and convinces him that she can provide the help he needs to enter a controversial poker tournament.

Trump You
by Art Cohen

Trump University was the most expensive legal defeat of Donald Trump's career, but even though he settled for $25 million, he still got off too easy. Years before his White House run, he launched a for-profit education initiative called Trump University in which he promised to share his real estate secrets at seminars held in hotel ballrooms. As it turned out, Trump University wasn't an actual university and didn't feature Trump's secrets. The scam suckered thousands of unsuspecting victims.

This book recounts the inside story of the TrumpU legal saga through the eyes of Art Cohen, a student/victim who personally sued Donald Trump in federal court in 2013 an had a private view of Trump during the height of his presidential campaign.

The 180
by George Calisto and Kate Calisto

An unexpected and provocative question drives a 180-minute argument that prompts a central question: Would the term "meritocracy" ever have been invented if society had gleaned the fact that variables beyond our control forge our personhood, paths and outcomes? The 180 tells the fictional story of a three-hour meeting where eight college administrators and two researchers engage in a philosophical and academic debate over the matter of luck in our lives.

The administrators and faculty members are unexpectedly thrown into a cauldron of psychological, neurophysiological and metaphysical speculations over what choreographs or drives our ambitions and achievements throughout the lifespan.

A modern, practical guide to buying your first rental property without losing your shirt! If you are looking for a comprehensive and trustworthy resource for investing in rental properties, start with this book.

The book shares important lessons learned from a real estate investor's true experience of buying a rental income property for the first time and being successfully profitable from day one. It is full of practical advice from an active real estate investor with his own skin in the game, minus the unnecessary real estate hype or sales talk. Regardless of your vantage point, this book will help build more stability, resilience and peace of mind into your personal and professional finances.