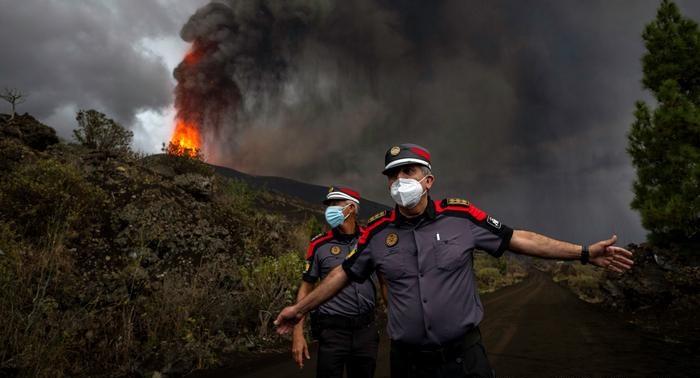 Residents of three towns on the Spanish island of La Palma have been ordered to leave their homes as volcanic eruptions continue.

Firefighters have also been forced to halt clean-up work.

Tenerife's fire service said in a tweet: "The volcano is in a newly explosive phase... Firefighters will not operate anymore today."


Residents of the towns of Tajuva, Tacande de Abajo and part of Tacande de Arriba were given an evacuation order by local authorities on Friday afternoon.

They were told to gather on a nearby football field after initially receiving instructions to remain inside their homes.

Residents have been trying to avoid thick clouds of ash and other fragments in the air.

A decision was made to leave the area over concerns of explosions.

What is the extent of the damage from the volcano?


To date there have been no reported fatalities or serious injuries since the volcanic activity began.

Hundreds of homes have been incinerated in lava flows since the eruption on Saturday.

Airlines traveling to the island canceled flights because of the ash cloud which worsened during the course of Friday.

Binter, Canaryfly and Iberia would not be operating flights.

According to the Canary Island Volcanology Institute (INVOLCAN) the ash cloud stretches more than 4 kilometers (2.5 miles) into the sky.