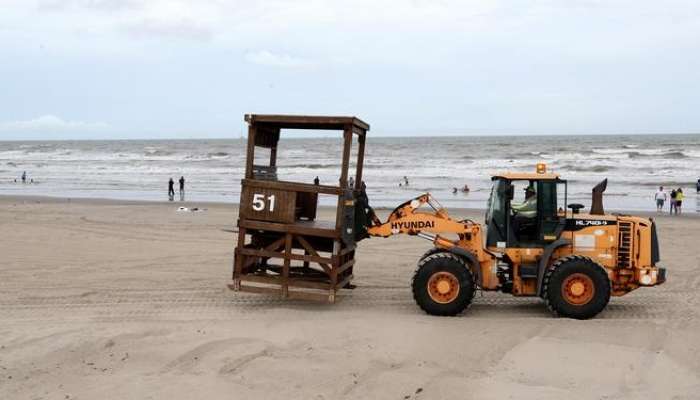 Hurricane Nicholas made landfall on the Gulf of Mexico on Tuesday, along the coast of the US state of Texas. It is the second hurricane to threaten the US Gulf Coast in recent weeks.

Hurricante Ida hit the gulf region in August, killing more than two dozen people and devastating communities in the US state of Louisiana, near the city of New Orleans.

Texas Governor Greg Abbott declared states of emergency for 17 counties and three cities, adding that boat and helicopter rescue teams had been deployed or placed on standby.

Nicholas had strengthened from a tropical storm to a Category 1 hurricane shortly before landfall.

"It will be a very slow-moving storm across the state of Texas that will linger for several days and drop a tremendous amount of rain," Abbott said.

Nicholas made landfall on the eastern part of Texas' Matagorda Peninsula, some 17 kilometers (10 miles) west southwest of Sargent Beach, Texas, with maximum winds of 120 kph (75 mph) according to the National Hurricane Center in Miami.

Region is still recovering from Ida


The US National Weather Service issued storm surge, flood and tropical storm warnings and watches throughout the region, calling Nicholas a "life-threatening situation."

"We want to make sure that no one is caught off guard by this storm," Louisiana Governor John Bel Edwards said.

He warned that drainage systems still clogged with debris from Ida and other storms might be overwhelmed by the heavy rain, which could trigger flash floods.

Officials expect the hurricane to knock out electricity, which would hamper ongoing restoration efforts from Hurricane Ida.

More than 90,000 people in Louisiana and more than 230,000 people in Texas faced outages as of early Tuesday, according to the website PowerOutage.us.

Hundreds of flights were canceled or delayed at airports in Houston and nearby Corpus Christi.

"I urge everyone to be OFF the roads by sundown and to avoid driving tonight through tomorrow as we anticipate heavy rainfall," Houston Mayor Sylvester Turner tweeted.

Houston was devastated by Hurricane Harvey in 2017. The Category 4 hurricane dropped up to 40 inches (102 cm) of rain in some parts of the city and killed more than 100 people.