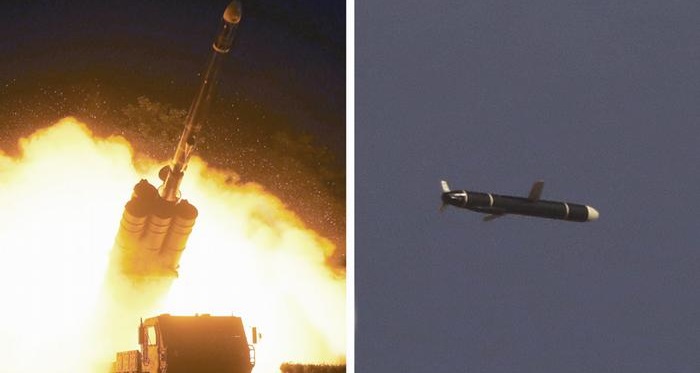 The exercise marks Pyongyang's first known testing activity in months and underpins how it continues to scale up its military arsenal amid a deadlock in nuclear talks with the United States.

What did North Korea say about the missile tests?


The missiles are "a strategic weapon of great significance ... for more reliably guaranteeing the security of our state," the Korean Central News Agency (KCNA) said.

It added that they successfully hit targets 1,500 kilometers (932 miles) away during flight tests on Saturday and Sunday, before falling into the country's territorial waters.

The missiles have reportedly been under development for two years.

"The test launches showed that the technical indices met the requirements of designs. In all, the efficiency and practicality of the weapon system operation was confirmed to be excellent,'' KCNA said.

What were the reactions to the missile tests?


Japan's Chief Cabinet Secretary Katsunobu Kato said his government was "concerned" about the reports. Japan is continuing to observe the situation closely, alongside South Korea and the US.

South Korea's military did not disclose whether it had detected the tests. However, the country's Joint Chiefs of Staff said the military was analyzing the launches based on US and South Korean intelligence.

The US military's Indo-Pacific Command (INDOPACOM) said it was aware of the reports and was coordinating with its allies and partners.

"This activity highlights (North Korea's) continuing focus on developing its military program and the threats that poses to its neighbors and the international community," INDOPACOM said in its statement.

How significant are the missile launches?


Analysts see the new missiles as possibly the country's first such weapon with a nuclear capability.

However, it is not clear if North Korea has mastered the technology required to build warheads which are small enough to be carried on a cruise missile.

"If you're developing missile systems, different ranges, different payloads like North Korea does, you have to test them on a regular basis. And failures will give you precious information on how to further develop them," Patrick Köllner, an Asia expert at the Giga Institute in Hamburg, told DW.

He added that the latest missile "obviously doesn't make it easier" for diplomatic negotiations with Pyongyang, but that it's part of the reclusive country's strategy.

"That's what it sees as its major strength, and it hopes to sort of negotiate on the basis of strength with both the US and South Korea — but most importantly, the US," Köllner said.

North Korean leader Kim Jong Un had said earlier this year that scientists were developing missiles "with the most powerful warheads in the world.''

Kim's top military official, Pak Jong Chon, witnessed the weekend test-firing, according to KCNA, and called for the country's defense scientists to go "all out" to increase military capabilities.