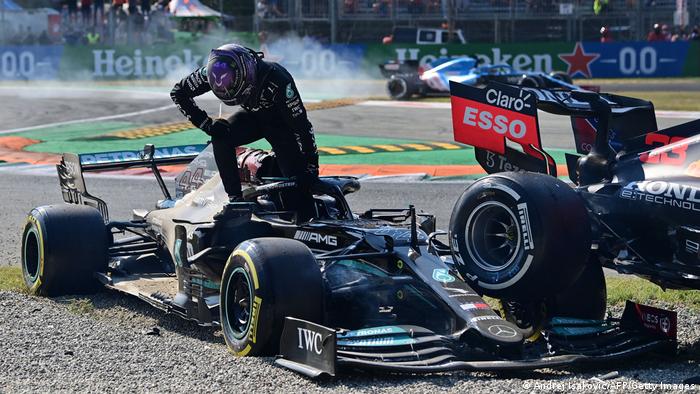 Monza : Red Bull's Max Verstappen has been handed a three-place grid penalty at the Russian Grand Prix for causing a collision with Mercedes driver Lewis Hamilton in Sunday's race at Monza.

Thanks to a slow Lap 23 pit stop, Verstappen lost a lot of time and when Hamilton pitted two laps later, he emerged alongside the Red Bull. As the pair negotiated the tight Variante del Rettifilo, they made contact, with Verstappen's Red Bull lifted into the air, hitting Hamilton's roll hoop before landing on the Mercedes' front wing. Afterwards the race, the pair were summoned to the Stewards, where the Dutchman was found guilty of causing a collision with the Mercedes driver.

"Max Verstappen has been handed a 3-place grid penalty at the #RussianGP for causing a collision in Sunday's race at Monza," Formula 1 tweeted. Now that the verdict over the incident has been given, the fallout between both camps will surely continue over the coming days after an unforgettable Italian Grand Prix.

The collision between the title contenders cleared the way for Daniel Ricciardo to claim a sensational victory at Monza. Ricciardo handed McLaren their first race win since the 2012 Brazilian Grand Prix - and a one-two to boot, as he led home teammate Lando Norris, with Valtteri Bottas taking third, in a thrilling race.