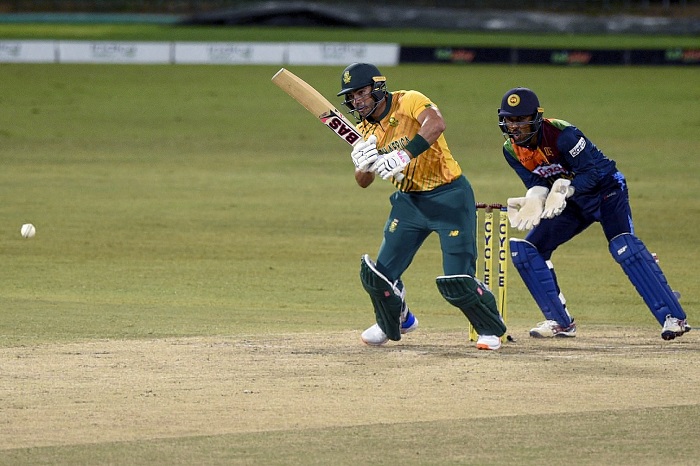 SA had a brisk start to their innings with openers Reeza Hendricks and Quinton de Kock looking in supreme touch.

Colombo: An all-around effort the South African players helped the visitors in defeating Sri Lanka by 28 runs at R Premadasa International Cricket Stadium to take a 1-0 lead in the three-match T20I series.

Batting first, the visitors had a brisk start to their innings with openers Reeza Hendricks and Quinton de Kock looking in supreme touch. The pair established a 73-run opening wicket stand as South Africa look set for a big total.

But Wanindu Hasaranga again showcased why he is regarded as one of the best all-rounders in the shortest format of the game. He dismissed de Kock on 36 and then followed it up with the scalp of Hendricks for 38 in his next over. Heinrich Klassen would soon follow suit, being trapped by Maheesh Theekshana on 2. Aiden Markram and David Miller were then left with the rebuilding job.

The pair did exactly that, with vital contributions which ensured that the Proteas would register a competitive score on the board. They came up with a 65-run stand, but would both perish in the end, trying to up the ante. Markram scored 48, while Miller contributed with 26 as the visitors would end up with a total of 163/5 in their 20 overs.

Sri Lanka went clearly nowhere in their chase as there wasn't even one proper partnership from the hosts in the game. Nortje cranked up the speed guns in his first over and then mixed his pace up perfectly with the older ball at the death. The Proteas spinners too were impressive, making good use of this sticky pitch, getting it to grip and keeping it tight.

Despite Chandimal's knock of 66*, the target proved to be too much for the hosts as they eventually ended up losing the contest by 28 runs with the Proteas going 1-0 up in the three-match series.