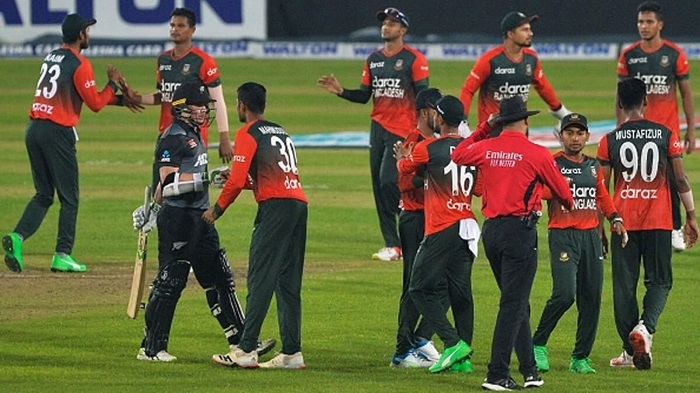 Bangladesh bowlers first came up with a thrilling performance with the ball to restrict the visitors to 93 all out.

Dhaka: Bangladesh registered their first-ever T20I series win against New Zealand after taking an unassailable 3-1 lead on Wednesday. They defeated the Blackcaps by six wickets at Sher-e-Bangla Stadium in the fourth T20I match of the series.

Bangladesh bowlers first came up with a thrilling performance with the ball to restrict the visitors to 93 all out. Then skipper Mahmud Ullah's unbeaten 43 helped the hosts in taking a 3-1 lead in the five-match T20I series. The series win is Bangladesh's third in the last three months - they beat Zimbabwe 2-1 in July and Australia 4-1 in August.

New Zealand were bowled out below 100 due to the heroics of Nasum Ahmed and Mustafizur Rahman. They became the first Bangladeshi pair to take four-wicket hauls in the same T20I innings.

Chasing the total, Mohammad Naim and skipper Mahmud Ullah stitched together a vital partnership of 34 runs and took Bangladesh close to yet another historic series victory at home. They could not take the hosts home though as Naim was run out on 29 with the score at 69/4.

Mahmud Ullah and Afif Hossain kept their nerves and the hosts chased the target with six wickets remaining. The skipper top-scored in the innings with a crucial knock of 43*.