Mustafizur defends 20 in final over as hosts win 2nd T20I 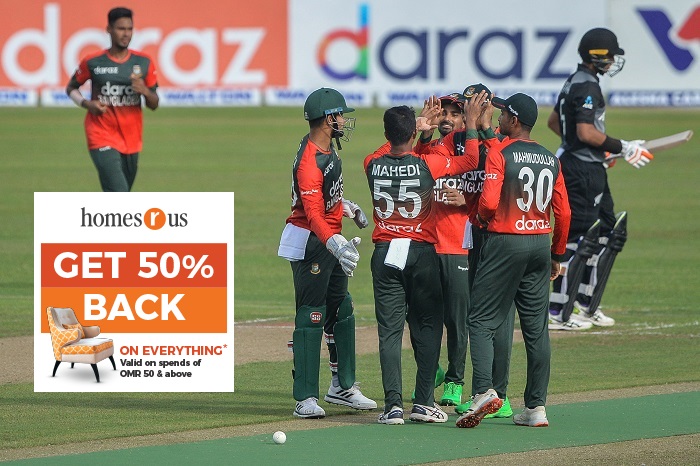 Mustafizur held his nerve to guide the hosts to a four-run victory.

Dhaka: Mustafizur Rahman defended 20 runs in the final over as Bangladesh defeated New Zealand by four runs in the second T20I of the five-match series here at the Shere Bangla National Stadium on Friday.

With this win, Bangladesh has taken a 2-0 lead in the five-match series. The third game will now be played on Sunday. Chasing 142, New Zealand got off to a bad start as the visitors lost openers Tom Blundell (6) and Rachin Ravindra (10) with just 18 runs on the board. Tom Latham and Will Young then put on 43 runs for the third wicket, but this stand came to an end in the 11th over as Shakib dismissed Young (22), reducing New Zealand to 61/3.

Colin de Grandhomme (8) failed to leave a mark with the bat and the visitors were left needing 57 runs to win off 34 balls. Latham kept on batting at one end, and he brought up his half-century. However, in the end, Kiwis were required to get 20 runs off the final over for the win.

Bangladesh was looking set for a win, but with 13 needed off two balls, Mustafizur first bowled a no-ball and that went for a boundary and this brought the equation to eight runs off two balls. However, in the end, Mustafizur held his nerve to guide the hosts to a four-run victory.

Earlier, Mohammad Naim and Mahmudullah scored 39 and 37 respectively as Bangladesh posted a total of 141/6 in the allotted twenty overs. Apart from these two, Liton Das also scored 33 runs to take the hosts' total past the 140-run mark.

Mushfiqur Rahim (0) and Shakib Al Hasan (12) failed to get going with the bat and as a result, the hosts had to contend with a total of just above 140. For New Zealand, Rachin Ravindra scalped three wickets while Ajaz Patel, McConchie, and James Bennett took one wicket each.