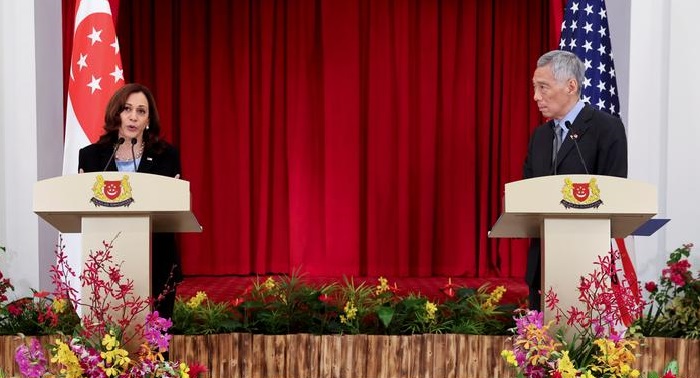 US Vice President Kamala Harris met with top officials in Singapore on Monday, reaffirming Washington's commitment to work with partners and allies.

Her visit comes against the backdrop of the United States' withdrawal from Afghanistan and the Taliban takeover, which have raised questions about Washington's credibility.

During a press conference alongside Singapore's leader, the vice president repeatedly insisted that the US could be counted on.

"Our administration is committed to enduring engagement in Singapore, into Southeast Asia and the Indo-Pacific," Harris told reporters.

"The reason I am here is because the United States is a global leader, and we take that role seriously," she said.

Singaporean Prime Minister Lee Hsien Loong welcomed her "reassurances on American intentions in the region, and in the world."

Harris' trip to Southeast Asia, which also includes a stop in Vietnam, aims to bolster ties with countries in the region seen as key in countering Chinese influence.

US 'focused on Afghanistan evacuations'


During a joint press conference with Lee, Harris said the US was focused on evacuation efforts taking place in Afghanistan.

"There is going to be plenty of time to analyze what has happened and what has taken place in the context of the withdrawal from Afghanistan," she said.

"But right now we are singularly focused on evacuating American citizens, Afghans who have worked with us, and Afghans who are vulnerable, including women and children, and that is our singular focus at this time," said Harris.

Harris thanked him for the "generous offer," which came after the US said it would draft commercial airlines to help with extra evacuation flights from Kabul's airport on Sunday.

"We hope Afghanistan does not become an epicenter for terrorism again," Lee said.


Harris also reaffirmed Washington's commitment to maintaining a rules-based international order and freedom of navigation in the Indo-Pacific.

The disputed South China Sea has become one of the many flashpoints in the testy US-China relationship.

"Today, we are in Singapore to stress and reaffirm our enduring relationship to this country and in this region, and to reinforce a shared vision of a free and open Indo-Pacific region," Harris said.

Lee said the perceptions of the US' resolve and commitment to the region would be determined by "what the US does going forward, how it repositions itself in the region, how it engages its broad range of friends and partners and allies."

While Singapore is not a US treaty ally, it remains an important security partner in the region as Washington seeks to keep an increasingly assertive China in check.

The country is home to the biggest port in Southeast Asia and supports continued free navigation in the area.