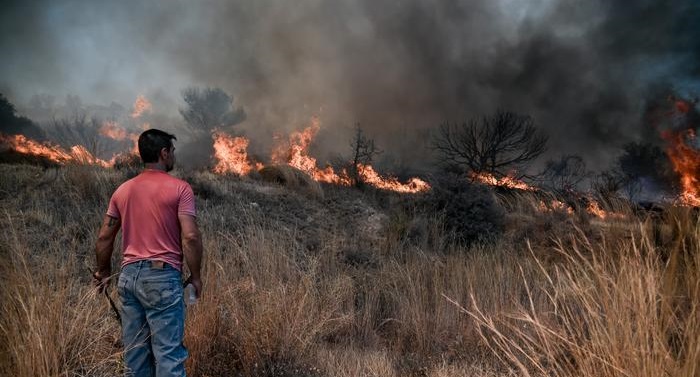 Firefighters in Spain started to get the upper hand in a blaze afflicting the center of the country on Monday while Greece struggled to fight off two blazes that started up in opposite sides of the country.

Winds dropped and temperatures fell on Monday in the Castilla y Leon region of Spain, allowing forestry employees to stop the spread of a fire that had forced the evacuation of around 1,000 people.

How are they doing in Spain?


About 1,000 firefighters, including military teams, have been fighting the Spanish fire in Navalacruz, which is part of the Avila province of Castilla y Leon, located 120 kilometers (75 miles) west of capital city Madrid.

An exploding car ignited the fire on Saturday, and, fueled by winds of 70 kilometers per hour (55 miles per hour), forced emergency services to evacuate eight villages.

With the help of 15 water-dropping aircraft, the wildfire was brought under "a certain control," said Juan Carlos Saurez-Quinones, environmental minister of the Castilla y Leon regional government.

He said that, if the cooler, less blustery conditions continued, firefighters could finally stabilize the blaze on Monday.

But State Meteorological Agency (AEMET) spokesman Ruben del Campo warned that it was not over yet. "After several days of heatwave, the vegetation has dried up more," said del Campo.


While winds had dropped off in Spain, the contrary was the casein Greece, where strong winds were fanning two wildfiresat opposite ends of the country.

Police are investigating reports an arsonist started the first blaze in Keratea by setting fire to a dumpster in southeast of Athens, which was now headed toward a national park in the Sounion region.

Before evacuating their homes, residents in the area watered down their homes as the professionals started to arrive.

Volunteers used hoses and branches to beat off the flames while 91 firefighters and six planes and six helicopters dumped water on the growing blaze.

Another 60 firefighters supported by eight water-dropping planes and five helicopters dealt with a fire in the Vilia area to the northwest of the country.

Three villages were on evacuation alert as strong winds started to make extinguishing the flames difficult.