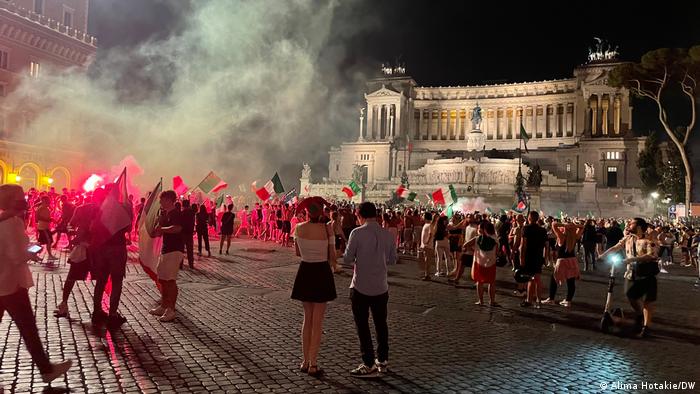 After a nightmarish couple of years full of lockdowns and human loss, Italy celebrated on Sunday night with victory at Euro 2020

Rome: "Il calcio e tornato a casa," read a subheading on the front page of the Corriere dello Sport in Rome on Monday morning after Italy beat England on penalties to win the 2020 European Championship: "Football has come home."

It was a sarcastic play on "Football's Coming Home," the tongue-in-cheek English refrain which provided much of the backdrop to the final, but it was as far as the Italian gloating went. The rest was pure pride and joy.

"Europe is ours!" screamed La Repubblica. "We are the champions!" added the Corriere della Serra. "The Azzurri conquer Wembley!" read La Stampa.

Throughout the night, the cries of joy had been just as loud on the streets as they were on the front pages as Italians celebrated their country's second European Championship, and their first since 1968.

Combined with four World Cups, Italy now have six major international trophies. But if there was ever a time when a prize meant more to a nation, then it's now.


"A lot of people suffered because of the coronavirus pandemic," said local football fan Luca. "Sport in general is good at bringing people together."

The unity resonates even more when those doing the unifying lead by example. In barely three years in charge, Italy head coach Roberto Mancini has turned a team which didn't even qualify for the 2018 World Cup into a synchronized machine.

They're now unbeaten in 34 games and kings of Europe. They're an extremely cohesive unit and it's something that many fans were quick to point out.

"They're not the best players, but they're the best team," said Italy fans Johannes and Nadine, who travelled all the way from Germany to Rome for the final. The pair celebrated Italy's victory with thousands of fans in the center of the eternal city.

At the start of the tournament, when DW reported on Italy's opener against Turkey in Rome, the mood was very different.

Italy had endured a nightmarish pandemic and several hard lockdowns. After so much human loss, football was almost an afterthought. Many Italians were still concerned about the coronavirus and its economic impact.

But with each victory, Mancini's men won the hearts and minds of a nation that needed a lift now more than ever. And it wasn't just the success; even in defeat on Sunday night, the team's qualities would still have resonated with fans.

"This team has character," said Giovanni and Marino, who have witnessed two Italian World Cup triumphs but still think this Squadra Azzurra has something special about it. "It's their ability to be courageous in difficult situations."


And the most difficult situation of the entire tournament arrived just two minutes into the final, when Luke Shaw gave England the lead and sent the home crowd into raptures.

But Italy clawed their way back and, when veteran defender Leonardo Bonucci equalized in the second half, fans at the fan zone near the Colosseum went wild. The tension returned as the game went into extra time, before the volcano of emotions erupted when the Azzuri sealed the deal on penalties.

It was as if all the bottled-up emotions accumulated during the pandemic finally found an outlet. For Armando, who managed to get one of the one thousand tickets to the fan zone, it was something special.

"We stayed at home a lot because of corona," he said. "Just to be here in a crowd to watch the game is like a miracle for everyone."

Triumph in the shadow of the pandemic

Friends Elisa and Francesco were too young to remember the last time Italy won an international trophy.

Unlike many fans who poured out onto the streets as if the pandemic were over, Elissa and Francesco continued to wear face masks and avoided major clusters of crowds, like the one at the Piazza Venezia. They watched from the periphery instead.

"We turned the streets into our stadiums … but we don't want to go into the crowds," said Elissa.

Francesco, a nursing student added: "I know how dangerous corona is. I'm worried that the numbers [of infections] could go up after these celebrations."

But it was hard to resist the temptation to join the massive street party that lasted until the early morning hours. Humans, by nature are social creatures, but the pandemic has complicated that.

At the start of the tournament, the beautiful game almost faded into insignificance here in Rome. On Sunday night, it was the pandemic which took a backseat.