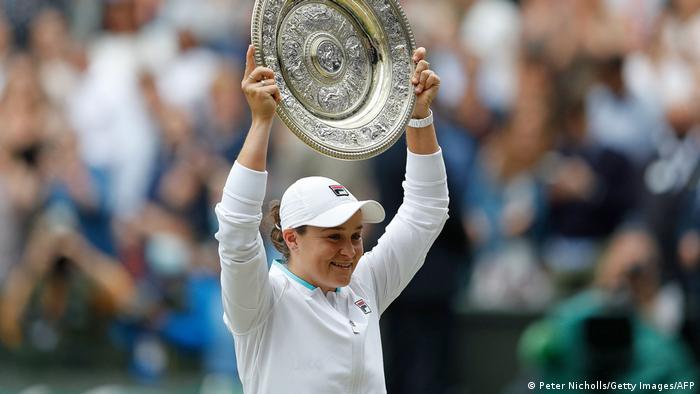 Half a century later, another Indigenous Australian named Ashleigh Barty earned her first Wimbledon crown. Wearing the same whites as her mentor, the 25-year-old defeated Karolina Pliskova of the Czech Republic 6-3, 6-7 (4), 6-3 to become the first Australian since Goolangong Cawley to win Wimbledon.

"I hope I made Evonne proud," the world number one said afterward, wiping back a tear.

Barty, who defeated former champion Angelique Kerber in the semifinals, got off to a roaring start, winning the first three games of the first set without dropping a single point.

Pliskova, who was hoping to get back into the top 10 in the women's rankings before Wimbledon, made life more difficult for the Australian in the second set. The eight seeded Czech battled back to take the second set on a tie break.

But Barty regained control in the third, frequently turning to her go-to backhand slice to grind down Pliskova.

"It was an exceptional match from the start, and I knew I needed to bring my best," Barty said.

Who is Ashleigh Barty?


Barty had previous success at Wimbledon a decade ago. She won the junior title in 2011 at the age of 15 at the All England Club, a victory that saw her reach No. 2 in the junior rankings.

She had turned pro the year before, and in 2012, she reached the main draw of the Australian Open, French Open and Wimbledon Grand Slam.

In 2014, Barty decided to take a break from tennis, saying she wanted "to experience life as a normal teenage girl and have some normal experiences." She even tried her hand at cricket, joining the Brisbane Heat of Australia's inaugural Women's Big Bash League in 2015.

But her itch for tennis returned a year later, and a few weeks after the WBBL season ended in February 2016, she rejoined the professional tennis circuit.

Like she did early in her career, Barty achieved a breakthrough in doubles events. She and CoCo Vandeweghe won the US Open doubles title in 2018, and won the French Open a year later, her first singles Grand Slam title.

In June 2019, she became the first Australian female since Goolagong Cawley to be ranked number one in the world. After briefly ceding that ranking to Naomi Osaka, she ended the year at the top of the women's rankings after winning the 2019 WTA finals.