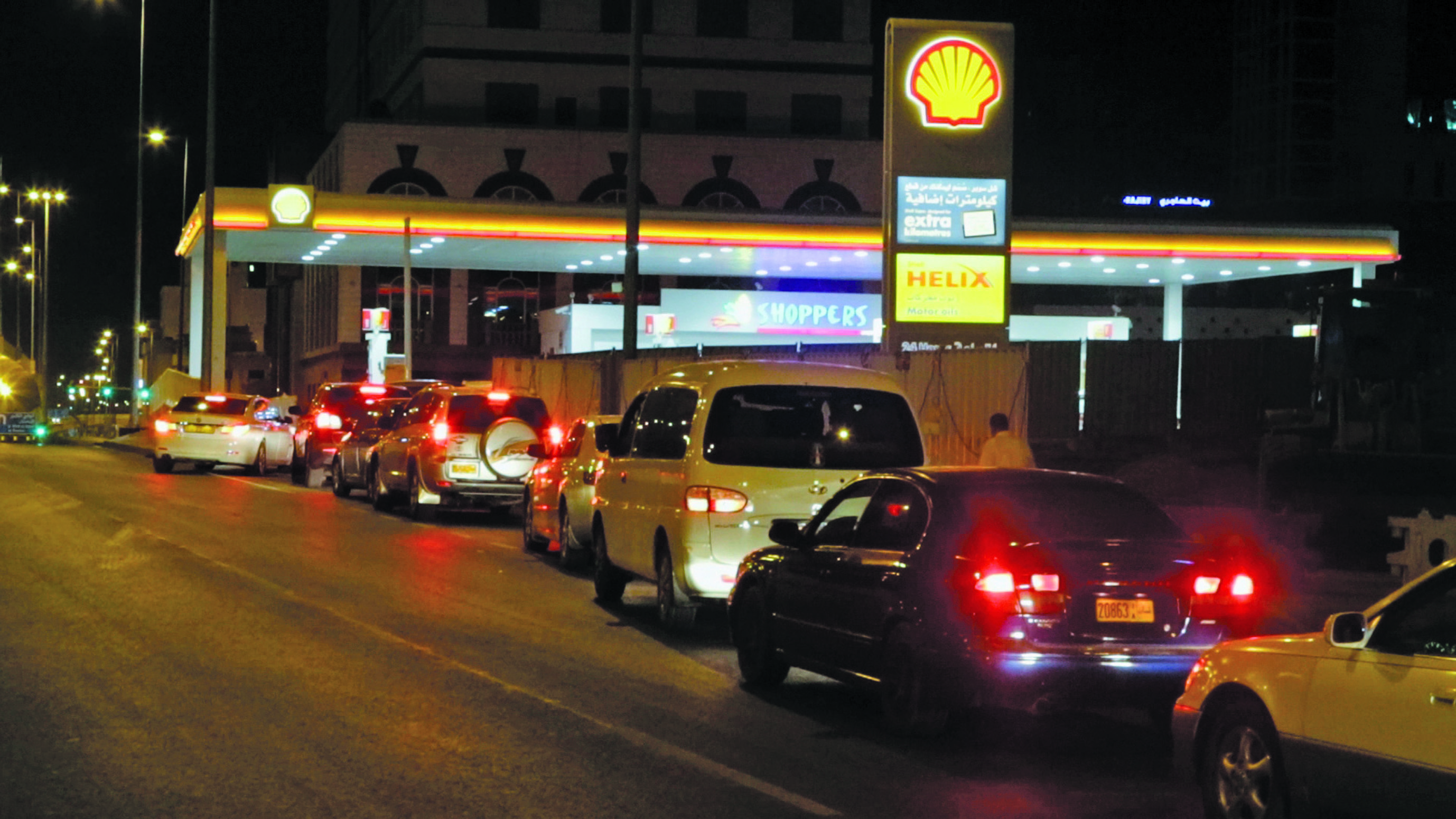 Muscat: Filling stations reported a staggering 50 per cent rise in sales on Tuesday as thousands of frustrated motorists battled to beat the midnight fuel price increase deadline.
Get your essential daily briefing delivered direct to your email inbox with our e-newsletter
Some stations ran out of fuel and long queues of drivers waited for more than an hour to fill their tanks ahead of the price hike.
Sales figures revealed by one station chain reveal that 50 per cent more fuel was sold in the 24 hours leading up to the price hike when compared to the previous day’s sales.
The company raked in an extra OMR14,276.584 by selling Regular grade and OMR44,508.148 by selling Super grade ahead of May 31 midnight hike, compared to sales on May 30.
The 21 baisas increase in regular petrol (M90), 19 baisas in super grade (M95) and 19 baisas in diesel led to long queues at filling stations all over Oman prompting station officials to shut down operations as they ran out of stock much earlier than expected.
Huge rush
“As the prices were announced on Tuesday afternoon, motorists rushed to fill their vehicles at the cheaper price. In all our filling stations, long queues were present by evening. By 10pm, many of our fuel stations ran out of stock,” Rajeev KR, the senior official at Siraj Al Jazeera Projects, a fuel sales company in Oman, said.
This month, the price of revised regular petrol (M90) is 170 baisas per litre, super graded (M95) is 180 baisas and diesel is 185 baisas while in May it was 149 baisas, 161 baisas and 166 baisas, respectively.
According to the sales charts of 34 fillings stations, the fuel company witnessed over a 50 per cent increase in sales of M90 and M95 within 24 hours.
On May 30, the company sold 397,262 litres of M95 while they sold 697,625 litres of the same on May 31.
Similarly, on May 30, while the company sold 135,313 litres of M90, they sold 231,129 litres on May 31.
“In regular and super sales, there was an increase of 52 per cent and 54 per cent respectively,” the senior official said, adding that at many of their stations, it was a chaotic situation.
“Our employers had a tough time running here and there,” the senior official added.
Mohammed Shafiqul Islam Bhuiyan, who manages a petrol pump at Ghala, said he reckoned a thousand motorists lined up in front of his petrol station between 7pm and midnight.
Stay ahead of the rest and download our free WhatsNews app for Apple, Android or Blackberry
Meanwhile, motorists said that they had not seen such a rush at fuel stations in the past in Oman.
“I had a bad time yesterday in filling my vehicle. I waited for my turn at a fuel station. After realising that it would take a long time, I then changed my plan and went to another one. There, I waited for at least one hour,” Sunil Sudevan, a marketing executive said.
Another motorist said he couldn’t take fuel because by the time he reached the filling station it had closed as it ran out of stock.
“It was a late night drive from Ibri to Muscat. I didn’t think of filling fuel on the way. By the time I reached Muscat, I saw long queues at fuel stations in Muscat. When I approached one in Seeb, they were out of stock. I filled fuel this morning only,” Rajendaran Ravi, an automobile parts salesman in Muscat, said.
According to the new price, consumers are forced to pay around 50 per cent per litre extra for regular petrol this month compared to the price before regulation on fuel was lifted in January.
Prior to the government lifting the regulation, the price of regular petrol in Oman was 114 baisas, while for super grade it was 120 baisas, and for diesel it was 146 baisas.
Now, just five months later, consumers have to pay around 49 per cent extra per litre of regular petrol, 50 per cent extra for super grade, and 26 per cent extra for diesel. Oman had deregulated its oil prices on January 15 this year as part of the austerity measures aimed at plugging the deficit.
On January 15, the price of super unleaded petrol was revised from 120 baisas to 160 baisas per litre. For regular it was raised from 114 baisas to 140 baisas per litre and for diesel, it was made raised to 160 baisas from 146 baisas per litre.
Meanwhile, economists feel that the petrol hike directly or indirectly affects all the major sectors like transportation, textiles and the auto industry.
“This affects the prices of essential commodities which are transported on a daily basis,” said a Muscat based financial expert, N Gurumurthy.
He added that given the slide in oil prices, the rise in petrol prices is an option that can help reduce the fiscal deficit.
“But compared to other countries it is still the lowest in the world,” he said.
A marketing executive in Muscat said that his company officials find it hard to pay the fuel cost to him as the prices keep rising every month.
“A lot of travel is needed for my job. The company pays my fuel bills. But, nowadays, they seem reluctant when they have to bear the extra cost as the prices keep rising,” Suresh Kumar S, the marketing official, added.
Fuel subsidies for 2015 were estimated to be OMR580 million, and with deregulation the government will be able to save that money, which is expected to be of great help in reducing the deficit.