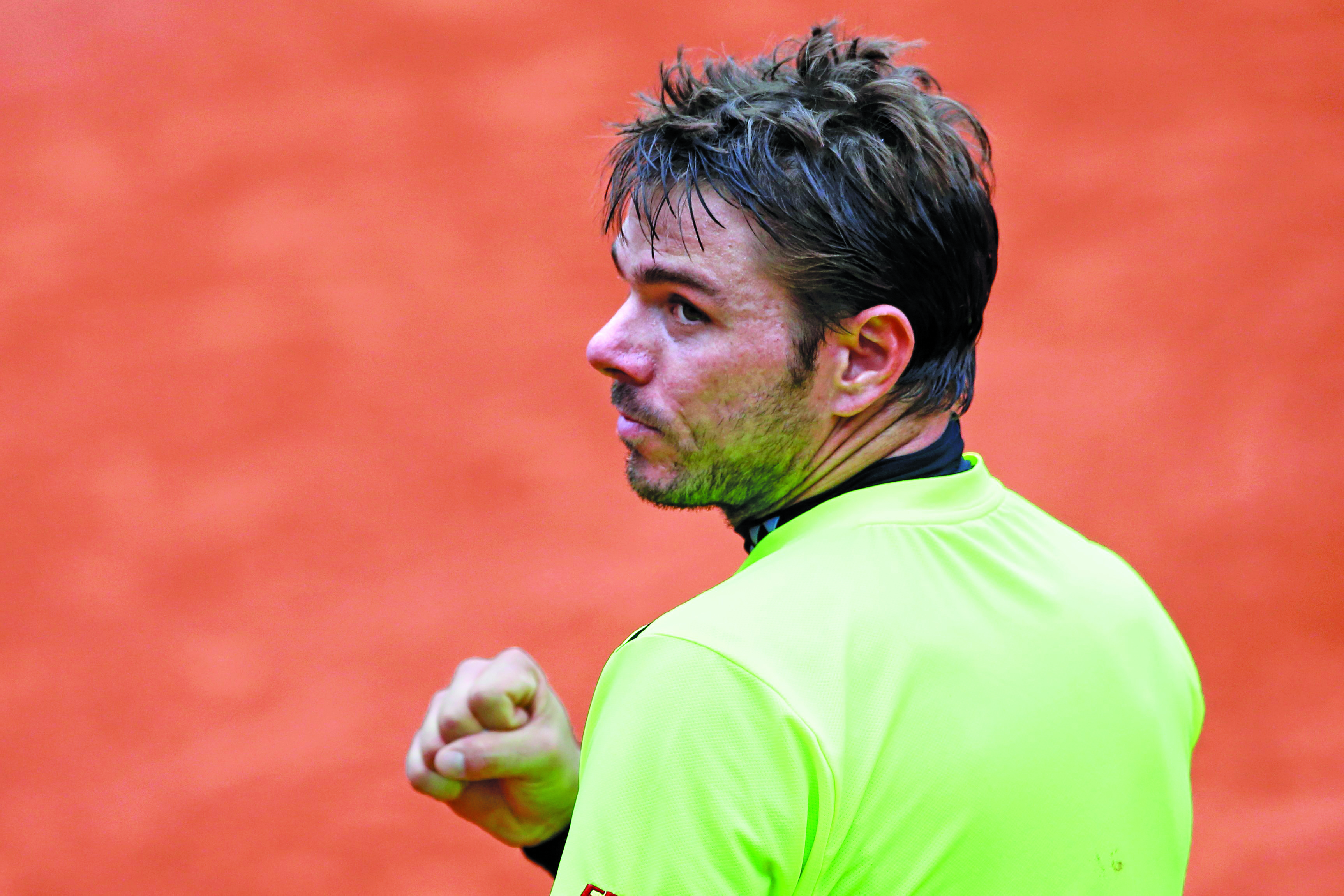 Paris: Number two seed Andy Murray overcame a bout of French Open 'dropshotitis' on Wednesday to beat Richard Gasquet, the last home player in the singles draw, in four sets and set up a semifinal clash with Stan Wawrinka.
Briton Murray played with power and control during the early part of a 5-7, 7-6 (3), 6-0, 6-2 win that maintained a perfect 5-0 grand slam record against the ninth-seeded Frenchman, breaking when Gasquet double-faulted to lose the second game and consolidating to lead 5-2.
But the momentum shifted dramatically in the eighth game when the Scot, stepping further into the court as he tried to force the pace, conceded three points in a row with unforced errors when 0-30 up.
Gasquet broke back in the next game and, as Murray turned increasingly to drop shots that the Frenchman began to read, reeled off the following three games to take a set his opponent had been in the most comfortable of box seats to win.
To the joy of a packed and increasingly animated pro-Gasquet centre court crowd, the pattern of the first set began to repeat itself in the second.
Murray again led 5-2, this time breaking in the sixth game, before his dropshot woes returned.
Gasquet, beginning to dominate as his silky one-handed backhand found its range and throwing in the odd drop shot of his own, duly broke back and took the set to a tiebreak.
But Murray won the breaker 7-3, claiming six points in a row from 3-1 down -- including a set-winning drop shot - in what he identified as a turning-point.
"It was very, very important to win the second set because it was a very physical match up to that point," he said courtside.
This time the Scot maintained his dominance and, reading Gasquet's serve more easily and bringing his superior fitness to bear, took sets three and four with the loss of just two more games.
Murray knows his opponent in Friday's semifinal -- which will be his fourth in Paris and his 19th in grand slams -- may present a tougher challenge.
"(Stan) is obviously playing great tennis," he said. "It is going to be extremely difficult (but) hopefully I can play my best tennis and reach my first final here."
Starting his match after Murray on Wednesday, Wawrinka finished while the Scot was still on court, beating Spain's Albert Ramos Vinolas in straight sets.

Easy for Stan
Defending champion Stan Wawrinka held off a late charge by Albert Ramos Vinolas to storm into the French Open semifinals with a 6-2, 6-1, 7-6(7) victory on Wednesday.
The third-seeded Swiss, who got off to a slow start in opening rounds of the claycourt grand slam, steamrollered through the first two sets and resisted in the third on Court Suzanne Lenglen to set up a meeting with world number two Andy Murray after the Briton saw off Frenchman Richard Gasquet in four sets.
Wawrinka used his single-handed backhand to move Ramos-Vinolas left, right and centre and it took the unseeded left-hander more than two sets to adjust.
After breaking back in the third, he forced a tiebreak and even had a set point but Wawrinka saved it and raised his arms in celebration when Ramos Vinolas's forehand sailed long on match point.
"By the end Ramos played better and I made mistakes. But I'm very satisfied that I won this in three sets," he said courtside.
While world number one Novak Djokovic only finished his fourth-round match on Wednesday after the tie was delayed by rain, Wawrinka is already through to the last four.
After labouring through the first game, Wawrinka crushed Ramos Vinolas to take the first two sets in less than an hour.
He seemed en route to dishing out a drubbing when he broke in the third, but Ramos-Vinolas played longer balls, putting the Swiss on the back foot to send the set into a tiebreak.
A string of unforced errors by Wawrinka meant the Spaniard had a set point at 7-6 but Wawrinka forced a backhand error and won the two remaining points.

Djoko's $100 million
Novak Djokovic had 100 million reasons to celebrate reaching the French Open quarter-finals on Wednesday -- albeit two days later than expected -- as players made a mad dash to clear the fourth-round backlog created by the fickle Parisian weather.
The Serbian world number one became the first tennis player to bank $100 million in prize money after his 3-6, 6-4, 6-1, 7-5 win over Spaniard Roberto Bautista Agut tipped him over the magic number.
However, the fourth-round winner's cheque is a far cry from the real prize Djokovic has his eyes on this week.
What he desperately wants is to get his hands on the Musketeers' Cup to complete his grand slam collection.
After winning a match that was originally scheduled for Monday, began on Tuesday and was finally completed on Wednesday, the 29-year-old will have to play four days in succession if he is to reach Sunday's title showdown.
"I have the feeling I played three matches against him," a grinning Djokovic told the crowd after donning a yellow rain hat during his victory speech.
"Yesterday the match was interrupted three times and it wasn't easy coming here at 9 am and leaving at 7.30 or 8:00 pm.
"So that's the reason why we should have the roof here. I'm hoping we're going to have it very soon," added the Serb after joining athletes such as golfer Tiger Woods and boxer Lennox Lewis in the $100 million club.
Djokovic will be back in action on Thursday to contest his 28th successive major quarterfinal against Czech seventh seed Tomas Berdych, a 6-3, 7-5, 6-3 winner over 2013 runner-up David Ferrer.
In contrast, Austrian tyro Dominic Thiem was enjoying his most successful run at a grand slam after beating Spaniard Marcel Granollers 6-2, 6-7(2), 6-1, 6-4 to set up a last-eight clash with Belgian David Goffin.
With only two hours of play possible over the previous two days as Parisians were hit by monsoon-like showers, the women in top seed Serena Williams's half of the draw had also been left bogged down in the fourth round for 48 hours.
Hence it was little surprise they were all in a hurry to play catch-up on Wednesday.

No family reunion
Williams is no stranger to playing in front of capacity crowds but barely a couple of hundred spectators bothered to turn up at the 15,000-seater Philippe Chatrier Court as she began her tussle against 18th seed Elina Svitolina.
However, one person who was there to witness the champion's 6-1, 6-1 walloping of Svitolina was her former on-court rival, four-times champion Justine Henin.
What Henin thought of her charge Svitolina's performance is anyone's guess but unlike the Belgian's often prickly encounters with Williams, Wednesday's match ended with the two players sharing a joke and a warm handshake at the net.
However, there will be no Williams family reunion at Roland Garros this year after Timea Bacsinszky ambushed Serena's elder sister Venus 6-2, 6-4.
On a day when it was so murky that the Eiffel Tower disappeared into the hazy clouds hanging over Paris, Venus arrived for her match on Suzanne Lenglen Court looking more like a winter sport athlete than someone about to play a tennis match on June 1 -- wearing leggings under her skirt and a long black quilted jacket zipped up to her neck.
Once the match got going, she failed to warm up sufficiently as Bacsinszky went on an eight-game roll from 2-0 down in the first set and kept up the run to dash dreams of a possible semi-final showdown for the most celebrated sisters in sport.
"My first win over Venus is -- well, it's just amazing," the beaming Swiss eighth seed said after reaching the last eight for the second year running.
Describing herself as "a chameleon" who can adapt to "every type of court" she will next face Kiki Bertens after the Dutch outsider downed American 15th seed Madison Keys 7-6(4), 6-3.
Serena will take on another unexpected quarter-finalist in the shape of Kazakhstan's Yulia Putintseva, who beat Spanish 12th seed Carla Suarez Navarro.