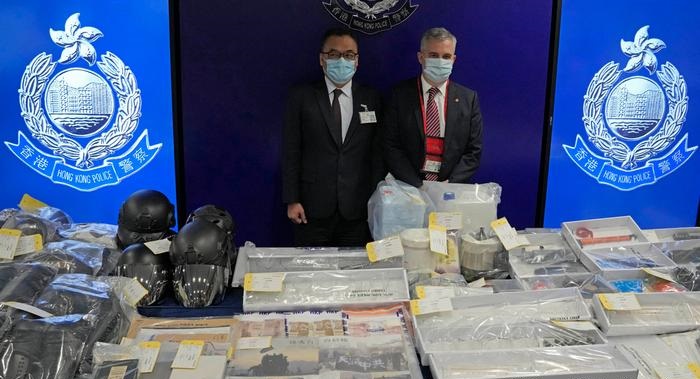 The police made the arrests after uncovering an alleged attempt to make explosives and plant bombs across the city.

The arrests come at a politically divisive time for Hong Kong — two years after months of pro-democracy protests rocked the financial hub.

Last week, a man stabbed a police officer with a knife, before killing himself in what authorities said was a "lone wolf" attack.

Who are the suspects?


The police said the five men and four women arrested were between the age of 15 to 39.

Besides the students, the group included a university management-level employee, a secondary school teacher, and an unemployed person.

Police said the nine people belong to a pro-independence group that called itself "Returning Valiant." They had been renting a hostel room in the heart of the city for about a month.

"They had a good division of labor among those arrested," said Senior Superintendent Steve Li of the Hong Kong Police National Security Department.

"Some of them provided money. Some are the scientists — the ones who made the bombs in the room."

"One is responsible for the sourcing of chemicals and other materials needed for the plan, while another small group of people creates the bombs, using chemical equipment," he told reporters. "There is also a surveying team and an action team, which is responsible for laying the bombs."

What did the police find?


Authorities said they found the apparatus and raw material used for making the bombs, which have been seized.

The group was allegedly attempting to make the explosive triacetone triperoxide (TATP) in the hostel room that police described as a laboratory for bomb-making equipment.

TATP has been used in terrorist attacks worldwide, including in Israel and London.

The suspects planned to use the TATP to bomb courts, and public infrastructure such as cross-harbor tunnels and railways, in addition to placing them in public trash cans, police said.

The motive was "to maximize damage caused to the society," they said.

Police also said that they found operating manuals and about 80,000 Hong Kong dollars ($10,300 or €8,700) in cash, indicating that the group planned to flee the city after carrying out their attack.

The officers froze bank accounts with funds worth HK$600,000 linked to the suspected terror activities.