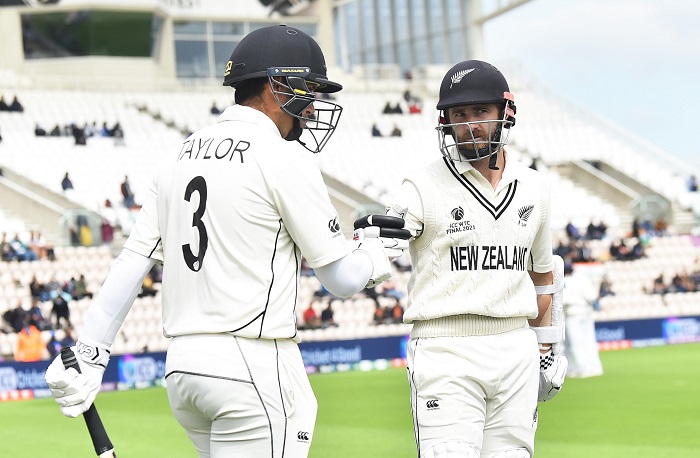 Kane Williamson and Ross Taylor, the ' two most experienced campaigners for Kiwis.

Southampton: Kane Williamson and Ross Taylor played unbeaten knocks off 52 and 47 respectively as New Zealand defeated India by eight wickets to clinch the inaugural edition of the World Test Championship (WTC) here at the Ageas Bowl, Southampton on Wednesday.

A complete effort on the Reserve Day saw New Zealand edging India in a final which had its ebbs and flows in the first innings. The Kiwis made full use of the slender 32-run lead and the Kane Williamson-led side bundled out India cheaply in the second innings to get a target of just 139. The batsmen did not relent and in the end, the side walked away with a comfortable victory. Requiring 139 to win, New Zealand openers Latham and Conway batted till the tea break, ensuring that their side did not lose any wicket before the interval. In the final session, New Zealand required 120 runs to win from 45 overs.

After the tea break, Latham (9) was sent back to the pavilion by Ravichandran Ashwin. The left-handed batter stepped out of his crease to go for a big shot, but he ended up missing the ball and as a result, he was stumped, and the first-wicket partnership of 33 runs came to an end.

Soon after, Ashwin had Conway (19) adjudged leg-before wicket, and New Zealand was reduced to 44/2 and the side still required 95 runs for the win. Ross Taylor then joined Williamson in the middle and the duo helped New Zealand to retrieve their innings.

Both batsmen mixed caution with aggression and in the end, the duo guided New Zealand to an eight-wicket victory.

Earlier, Tim Southee scalped four wickets as India was bundled out for 170 in the second innings on the Reserve Day. The inspired show with the ball ensured that New Zealand would need to score 139 runs in a minimum of 53 overs to win the title.

Rishabh Pant top-scored for India as he played a knock of 41 runs, but he hardly found any company as none of the top-order batsmen managed to spend time in the middle. It was ultimately left on the likes of Ravindra Jadeja (16 off 49 balls) to give him company as India lost the wickets of Virat Kohli (13), Cheteshwar Pujara (15), and Ajinkya Rahane (15) in the first session itself.

Right from the first session, the Kiwi bowlers brought out their A-game. It was all about discipline and patience for the New Zealand bowlers as they kept attacking the channel outside the off-stump with the occasional bouncers to rough the batsmen up. Kohli played an unfamiliar shot and what followed is hard to explain. A mixture of good deliveries and soft dismissals resulted in India being bundled out without showing much fight. Experienced players like Ajinkya Rahane and Cheteshwar Pujard were not able to show any resistance and it was ultimately too much to ask of from the lower order.

Resuming the second session at 130/5, Pant and Jadeja managed to add 12 more runs to the total before Jadeja's (16) stint at the crease came to an end as he was sent packing by Neil Wagner. The left-armer angled one across the channel, and Jadeja poked at the delivery, handing an easy catch to BJ Watling behind the stumps.

Ravichandran Ashwin joined Pant in the middle and the duo managed to add 14 more runs to the total, but this partnership too came to an end in the 70th over as Pant (41) gifted his wicket to Trent Boult. Pant decided to step out and lofted the ball in the air. It was a casual end to what had been a fighting knock till then. Even though he did miss quite a few balls, he was looking to apply himself till Boult got the better of him. Henry Nicholls took a stunner to send Pant back as it was the beginning of the end of the India essay. In the very same over, Ashwin (7) was dismissed by Boult, and India was reduced to 156/8.

Mohammed Shami did manage to add 13 valuable runs to the total, but in the end, it was all about waiting for the innings to end. Kyle Jamieson returned with two wickets while Boult picked three. Not to forget Wagner's lion-hearted effort even though he had only one wicket to show for his efforts.

In the first innings, a similar story unfolded as India suffered a collapse and the side was bowled out for 217. New Zealand was reduced to 192/7 at one stage in their innings but the lower-order came to the rescue and the Kiwis managed to take a lead of 32 runs.