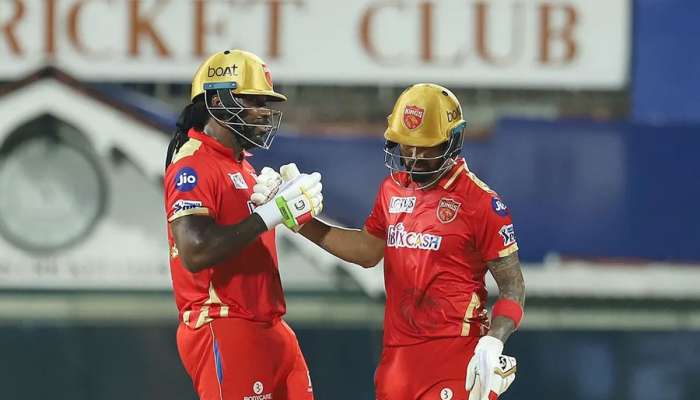 Ahmedabad: Chris Gayle and KL Rahul fired with the bat before Harpreet Brar and Ravi Bishnoi picked three and two wickets each to help Punjab Kings register a thumping 34-run win over Royal Challengers Bangalore (RCB) in the Indian Premier League (IPL) encounter at the Narendra Modi Stadium on Friday.

Chris Gayle had blasted five fours in six balls before KL Rahul changed gears in the death overs to steer Punjab Kings to 179/5. In reply, RCB was only able to score 145/8, thanks to a brilliant bowling performance from Harpreet and Bishnoi. Harpreet picked three key wickets for Punjab Kings as he dismissed Virat Kohli, Glenn Maxwell, and AB de Villiers after shining with the bat. He had played an important cameo alongside skipper Rahul to help the side finish their innings on a high.


Chasing 180, RCB got off to a bad start as in form opener Devdutt Padikkal was removed by Riley Meredith in the third over. However, skipper Kohli and Rajat Patidar then carried RCB to 36/1 at the end of the powerplay.


The duo continued to score at a brisk rate as RCB reached 62 runs at the halfway mark. Harpreet removed both Kohli and Maxwell on consecutive balls to put RCB on the backfoot.


Kohli stepped down but missed as Harpreet bowled the Indian skipper to get his first IPL wicket. He then cleaned up Maxwell to reduce RCB to 62/3.


But RCB hopes of winning the game finally ended when Harpreet dismissed AB de Villiers in the 13th over. The side collapsed from 62/1 to 69/4 and lost a flurry of wickets at the back end of their innings.


Rajat, Shahbaz Ahmed, and Daniel Sams all got out within seven balls as RCB got reduce to 96/7. However, a late onslaught by Kyle Jamieson and Harshal Patel took RCB over the 140-run mark before they lost the game by 34 runs.


Earlier put in to bat first, Punjab Kings got off to a slow start but things soon fell into place as Chris Gayle, who came into bat at number three and hammered five fours in the sixth over to take his side to 49-1 at the end of the powerplay.


Gayle continued his onslaught and took Punjab Kings to 90/1 at the end of the tenth over. However, RCB soon bounced back with two quick wickets. Daniel Sams removed Gayle while Jamieson dismissed Nicholas Pooran in the 12th over.


Punjab Kings' middle-order collapsed when Shahrukh Khan was bowled for a duck reducing the side to 118/5. But Rahul and Harpreet Brar took on RCB bowlers and reached the 150-run mark at the end of 18 overs. In the final over, Punjab Kings scored 22 runs to get close to 180.