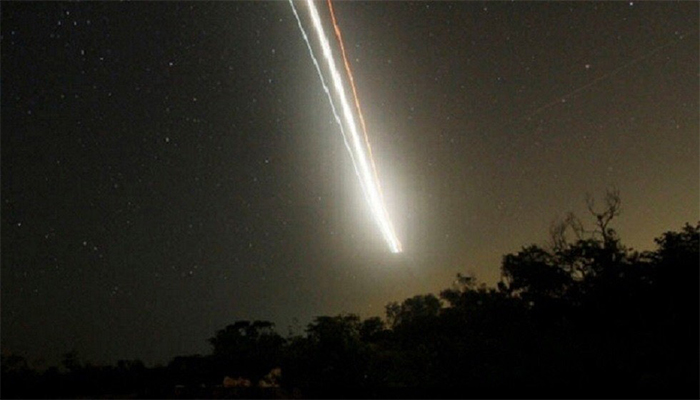 Muscat: The Sultanate on Wednesday evening saw the emergence of a flaming fireball in the sky over some regions.

Speaking exclusively to the Times of Oman, Yusuf bin Zahir Al Salmi, Official of Al Huwqain Astronomical Observatory, said: "Eyewitnesses from Al Huwqain, Wadi Bani Ghafir villages in the Wilayat of Rustaq in South Al Batinah Governorate and from the Wilayats of Ibri, Yanqul, and Dhank in Al Dhahirah Governorate, reported that at exactly 8:28 pm on Wednesday’s evening the 15th of Ramadan, April 28, 2021, a very bright white light was seen tending to blue, penetrating clouds, starting from the northeast, heading to the southwest, and after a few seconds an explosion followed.”

He explained, "In conclusion, this is a fireball, which is made of stones from the remnants of ancient comets, whose path intersected with the path of the planet, and because of the gravitational pull of the earth, it entered the earth, and when it contacted air particles, it led to its burning.”
”The sound that was heard, maybe because it exploded before it fell to the ground, or perhaps it collided with the ground and caused this sound, but it is likely that since the sound of the explosion was heard from far away, this is evidence that it exploded in the air before hitting the ground," he added.
Al Salmi pointed out that about three years ago and during this same period, the same scene occurred, and also seven years ago, a similar scene occurred, of watching a fireball flying in the same path from the northeast to the southwest, followed by the sound of an explosion.
“The earth is currently witnessing showers of meteor guitars. This may be the remnants of an old comet. I request everyone to please give more attention to the competent authorities, as they may find remnants of the explosion and meteorites,“ he added.