One year on: New airport flying high on global map 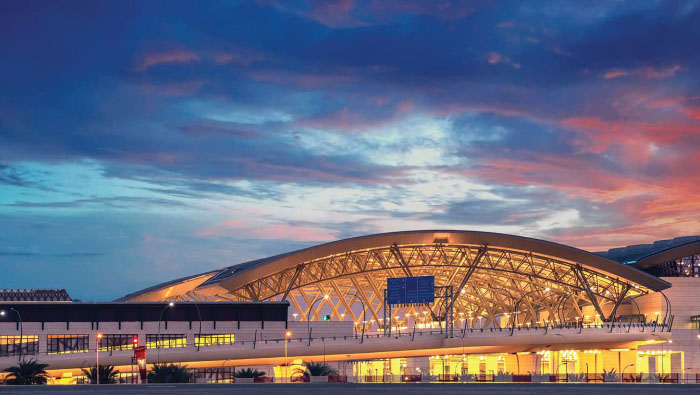 Muscat: Since opening its doors a year ago, Muscat’s award winning International Airport has welcomed 15 million passengers, an increase of 9.6 per cent. Times of Oman looks back at some of its major achievements in 2018
Opened on March 20, 2018, Muscat International Airport was built over a floor area of approximately 580,000 sqm and has the capacity to serve 20 million passengers per year, with an expansion potential of up to four times that number. “Since opening, it has welcomed over 15 million passengers amounting to an increase of 9.6 per cent,” according to a statement from Oman Airports.
During this time, it also achieved a 95 per cent Omanisation rate and an employee satisfaction rate of 73 per cent.
Muscat International Airport was awarded ‘Most Improved Airport-Middle East’ at the Airports Council International’s 2018 Airport Service Quality (ASQ) Awards.
Last year, the airport was awarded the “Best Leading Airport 2018” at the World Travel Awards.
In February, Oman Airport implemented a gate system in the vehicle lanes in front of the departure and arrival gates at Muscat International Airport .
The new system gives a 10-minute free grace period for dropping off and picking up travellers at the airport. The policy was implemented after it was successful at the Salalah Airport to organise traffic flow.
Fine on unauthorised taxis
Additionally, a fine of OMR200 was introduced to any unauthorised taxis that pick up passengers at Muscat International Airport. This comes as the Ministry of Transport and Communications attempts to crack down on illegal passenger transport to and from the airport.
During 2018 the airport has also achieved Level 2 certification for airport carbon accreditation in line with Oman Airports plans to cut carbon emissions at the sultanate’s airports.
Muscat International Airport, which is overseen by the Ministry of Transport and Communications, has a passenger terminal, a 4-km runway, a 103-metre air observation tower, an air cargo terminal, and a catering terminal, as well as an aircraft maintenance building.
The passenger terminal includes 118 booths to complete the travelling procedures and 82 counters for passports and immigration control, manned by Royal Oman Police, in addition to a host of retail services across the airport.
It has two gates for larger aircraft, such as the Airbus 380 and Boeing 747, which are connected to bridges to transport passengers. The building uses 11.2km of conveyor belts for baggage handling, with a capacity of 5,200 bags per hour. VIP lounges for first and business class passengers can also be found here, with offices for airlines and rent-a-car operators, in addition to tourism information and assorted services.
The building also accommodates a four-star hotel with 90 rooms, swimming pools, and food lounges, with space for adding 90 more rooms in the future. There are 29 gates linked to 40 bridges to transport passengers to and from the aircraft, and 16 ground gates to transport passengers by bus. It has 59 parking slots for aircraft.
The air cargo building has a capacity of over 32,000 square metres with a capacity of 350,000 tonnes per annum that can be increased to 500,000 tonnes. It has a building for handling goods to ensure the smooth handling of goods containers, as well as 4,722 car parking spaces, including 2,054 shaded spaces which are connected to shaded aisles for passenger comfort on the way in to the terminal. Areas for buses stations, in addition to buildings for allied services and facilities make up the rest of the facility.
Future plans for Oman Airports
Earlier this year, Mustafa Al Hinai Chief Executive Officer of Oman Aviation Group, spoke about the 2019 plans for the aviation sector in Oman.
According to Al Hinai, technology is set to be a critical focus, as the group is planning on investing in technology for all their operations. This year, the aviation sector is moving towards digitization and cyber security
The CEO also spoke of exploiting Oman’s airports in terms of its commercial and operational position.