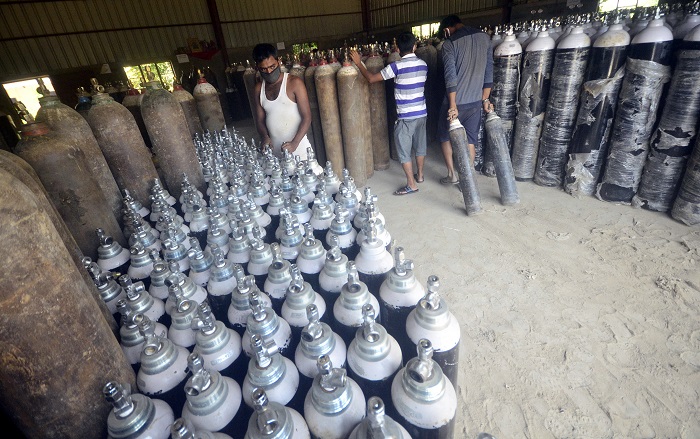 New Delhi: An unprecedented surge in Covid cases has left several hospitals in Delhi desperate for oxygen, Sir Ganga Ram Hospital chairman Dr D S Rana appealed for urgent help stating that it has oxygen left only for half an hour and asked Centre to appoint a nodal officer to sit in the hospital to take stock of the situation.

"Presently we have 516 covid patients, 128 are high flow patients, and oxygen left will only last for half an hour. It is a crisis situation. Let government appoint a Nodal officer to sit in the hospital to take stock of the situation. We have 70 cylinders for back up, they filled only 30. All are empty now. How can we have backup plans? Ambubags are being used. Doctors, nurses are exhausted. Their morale is low," said Dr Rana . He further said, "Patients are suffering. We feel sad to see people bringing their oxygen cylinders. Hospital has been and is approaching all authorities and Nodal officers but no help is coming. Since yesterday night, hundreds of calls have been made but nobody received those calls. When we contacted the Government's helpline number, it too could not help saying, "we can only forward the compaint".

"People have right to get oxygen. If the government has no oxygen, it should admit," he added.

He further stated, "It is a grave situation. Medical professionals need to guide the authorities .

Vendor Inox is not helping at all. It promises but does not supply on time. Yesterday the supply which should have come at 11 pm , came at 5:30 am today , which also is about to finish now .

"Everyday and every few hours we are just making panick calls. Raghav Chadha, our local MLA has been there in our struggle. Now also, he has promised that the oxygen tanker will soon reach SGRH from from Batra Hospital. But at some point he is also helpless. Some action needs to be taken urgently," remarked Rana.

Dr SCL Gupta of Delhi's Batra Hospital said the hospital needs more oxygen considering the number of patients admitted. According to Dr Gupta, the total oxygen needed is over 8000 litres.

Speaking to ANI, Dr SCL Gupta, MD, Batra Hospital, said, "We have received only 500-litre of oxygen after pleading for 12 hours. Our daily requirement is 8000 litres. We've 350 patients in the hospital. The treatment of choice in COVID is oxygen but when we don't get it what will happen?"

"Delhi Government has provided us with an oxygen tanker. We have another one to one and a half hours of oxygen for all our patients," added Gupta.

In yet another instance of oxygen shortage, Delhi's Jaipur Golden Hospital said it has supply that will only last for half an hour putting the lives of more than 200 patients at stake. He said that 20 people died due to an oxygen shortage last night.

"Oxygen supply to last only half an hour now, more than 200 lives are at stake. We lost 20 people due to an oxygen shortage last night," said DK Baluja, Medical Director of Jaipur Golden Hospital.

"All ICU beds at our hospital are full for the last 4-5 days. Some critical patients need 40-50 ltr of oxygen per minute to maintain oxygen saturation level. The oxygen supply chain is compromised," said Dr. Suresh Kumar, MD, LNJP Hospital.

Meanwhile, five patients died due to oxygen shortage in Amritsar's Neelkanth Hospital which has been facing a shortage of oxygen supply since the last 48 hours.

"Five patients have died at the hospital. We are facing an oxygen shortage for the last 48 hours. The administration is saying that oxygen will not be given to private hospitals before government hospitals," said Himanshu Garg, MD, Neelkanth Hospital.

According to the Union Health Ministry, Delhi is among the ten states reporting 75.01 per cent of the new COVID-19 cases in the country and among the twelve states displaying an upward trajectory in daily new cases. The national capital reported 26,169 new cases in the last 24 hours. According to the ministry, Delhi recorded 306 deaths in the last 24 hours.

According to the official data issued by the Union Health Ministry, the country has recorded 2,624 new deaths due to COVID-19 in the last 24 hours

Meanwhile, the cumulative number of COVID-19 vaccinations administered in the country stands at 13,83,79,832.