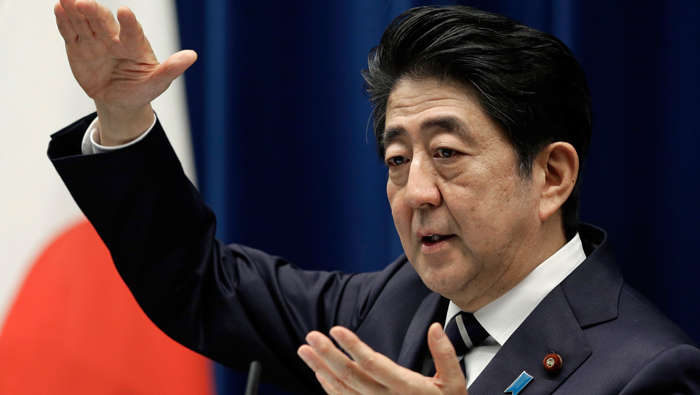 Tokyo: Japan Prime Minister Shinzo Abe plans to propose a fiscal stimulus package of as much as ¥10 trillion ($90.7 billion) after warning Group of Seven (G7) leaders that the global economy faces significant risk of another crisis, according to the Nikkei nnewspaper.
Abe will seek a second supplementary budget worth ¥5 trillion to ¥10 trillion after July’s upper-house election, the ‘Nikkei’ reported on Saturday without attribution. Proposals will include accelerating the construction of a magnetic-levitation train line from Nagoya to Osaka, issuing vouchers to boost consumer spending, increasing pay for child-care workers and setting up a scholarship fund, the Nikkei’said.
"When you want to get the economy going, as long as demand in Asia is weak, you need additional public spending,” Martin Schulz, a senior economist at Fujitsu Research Institute in Tokyo, said by phone. "Since private spending is still not picking up, the government is simply taking up the slack.”
Abe is getting closer to delaying an increase in Japan’s sales tax, saying on Friday he’ll make a decision before an upper-house election this summer on whether to go ahead with a planned hike in the levy next April to 10 per cent, from 8 per cent. A formal announcement of a two-year delay is expected on Wednesday at the close of the parliamentary session, the Nikkei reported. A Japan government official declined to comment on Saturday.
Tax delay
This would be the second postponement by Abe, as the tax was initially scheduled to be raised in October 2015. An increase in the levy in 2014 pushed Japan into a recession. Abe had previously said the tax hike would be delayed only if there was a shock on the scale of a major earthquake or a corporate collapse like that of Lehman Brothers.
Since the previous tax hike, the economy has swung between contraction and growth, with consumer spending remaining weak. Bank of Japan governor Haruhiko Kuroda has struggled to spur inflation despite record asset purchases and negative interest rates. Consumer prices excluding fresh food fell 0.3 percent in April from a year earlier, after dropping by the same amount in March, data released on Friday showed.
Meanwhile, the yen has surged about 9 per cent versus the dollar this year, threatening profits for exporters including Toyota Motor and weighing on the nation’s stock market. The benchmark Topix index has fallen 13 per cent in 2016.
Second package
The stimulus package would be the second this fiscal year after Japan approved a ¥778 billion supplementary budget this month to aid recovery from earthquakes in the Kumamoto region.
The G-7 industrial nations will use "all policy tools -- monetary, fiscal and structural — individually and collectively to strengthen global demand and address supply constraints while continuing our efforts to put debt on a sustainable path,” the group said in a statement on Friday after a two-day summit in central Japan. Abe failed in his bid to have his warning of a global crisis included in the communiqué.