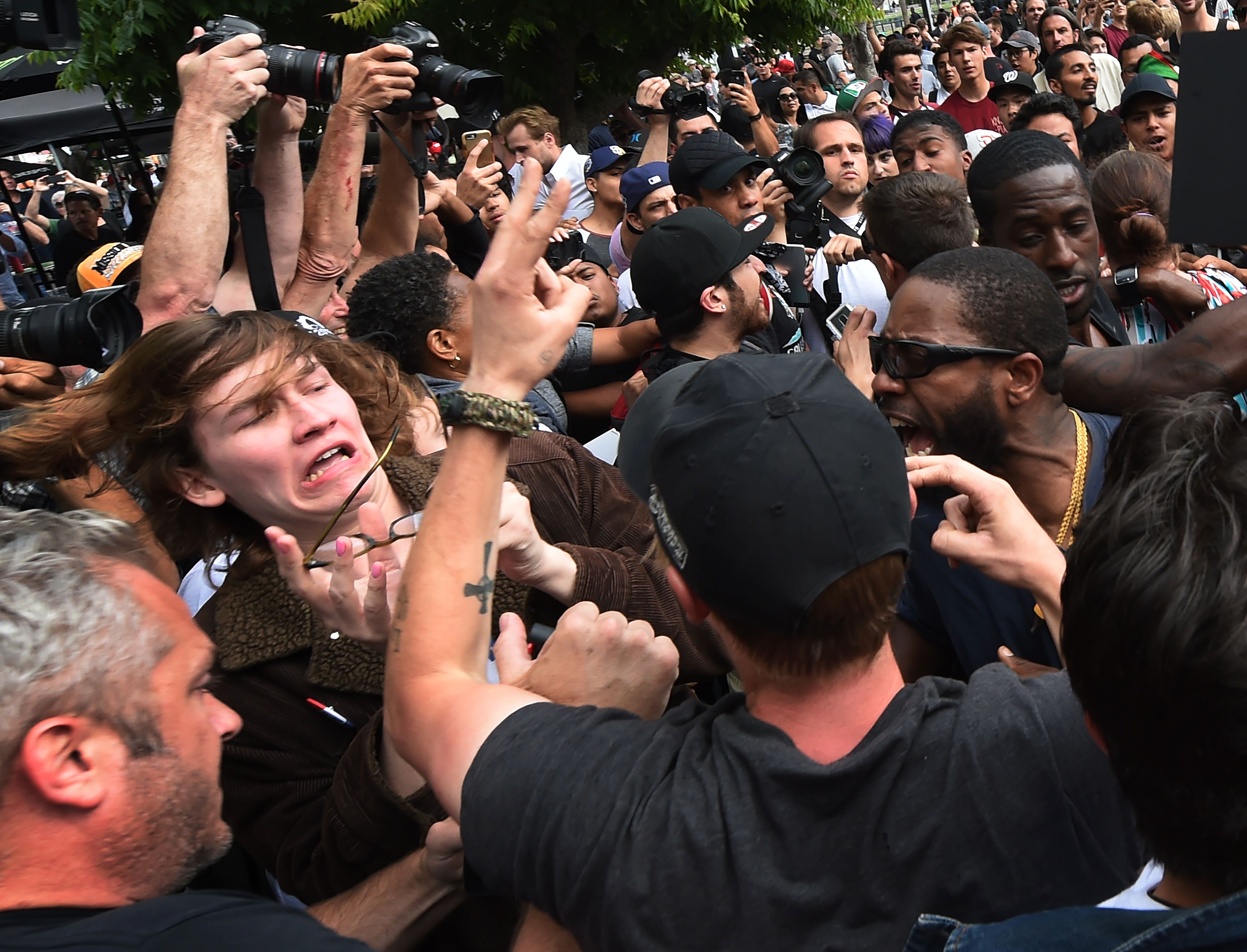 Washington: Hundreds of Donald Trump supporters and protestors clashed outside an election rally of the presumptive Republican presidential nominee in San Diego as police in riot gear and wielding batons arrested 35 people in the second scuffle in three days to hit his campaign.
People from both sides screamed at each other and threw water bottles, as the police tried to control the situation, firing pepper-balls.
The clash between pro and anti-Trump groups occurred after the Republican leader ended his speech in San Diego in the western California state on Friday, with several people throwing stones and plastic bottles, some that hit police officers. Police were deployed in riot gear as the billionaire from New York addressed a massive rally at a convention centre. After issuing orders to the crowd of roughly 1,000 to disperse, police began forcefully and aggressively pushing protesters - who were waving Mexican flags and holding anti-Trump signs - checking them with their batons.
Some protestors also scaled barriers, according to reports. At least 35 people were arrested, police said, adding that no property damage was reported and no injuries were reported. "Crowd behaviour has become unlawful. An unlawful assembly has now been declared. It is illegal to remain in the area," the San Diego Police said in a situational update, adding its forces would be deployed till late in the night.
Later, Trump appreciated the police for handling the "thugs". "@SanDiegoPD- Fantastic job on handling the thugs who tried to disrupt our very peaceful and well attended rally. Greatly appreciated!" he tweeted. At his rally, Trump also responded to US President Barack Obama's comments a day ago that world leaders are rattled by his campaign rhetoric and assured his supporters that he would get along well with foreign leaders. "I happen to be a nice person, folks. I'll get along great. I will get along so great with these countries. I will get along so great," Trump told thousands of his supporters.
"He (Obama) said on Saturday that our trading partners and countries that we have relationship with, they're rattled. I said, "Yay, oh, that's so good."," Trump said. Someone grabbed a man's "Make America Great Again" hat and burned it, according to San Diego Tribune.
Officers in helmets, masks, pads and with long wooden batons massed in lines, then moved slowly toward the unruly protesters. By evening, police had managed to move and disperse the crowd, and few were left, the daily reported. Trump was in the city near the Mexican border to hold a rally ahead of the 7 June California primary and in his San Diego rally pledged to build a border wall to keep out illegal immigrants. This is the second anti-Trump protest in three days.
His rally in New Mexico on Tuesday turned violent as protesters toppled barricades and threw rocks, burning T-shirts and plastic bottles at police officers, injuring several people.