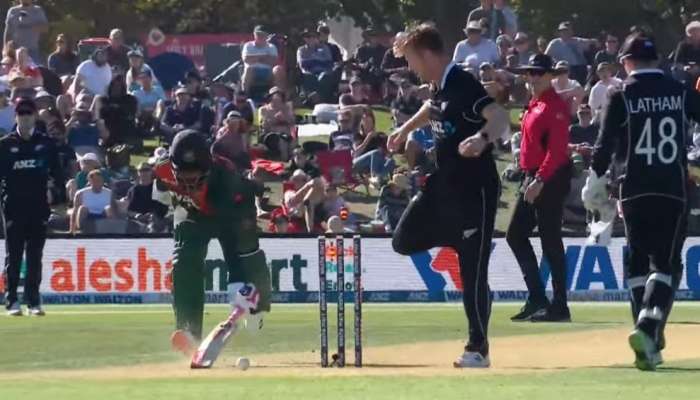 Napier: An all-round bowling performance from New Zealand neutralised the effect of Soumya Sarkar's fighting half-century and helped the Kiwis register an easy win over Bangladesh in the second T20I on Tuesday.

Skipper Tim Southee, Hamish Bennett, and Adam Milne all picked two wickets each to restrict Bangladesh to 142/7 in 16 overs. With this win, the Kiwis took an unassailable 2-0 lead in the T20I series. Glenn Phillips had played an unbeaten knock of 58 runs as New Zealand scored 173/5 in 17.5 overs. Rain played spoilsport in the first innings and after the DLS method, Bangladesh was given a target of 170 in 16 overs.

Chasing 170 runs, Bangladesh did not have a good start but Soumya Sarkar took on the New Zealand bowlers. The left-handed batsman single-handedly steered the visitors over the 50-run mark before the completion of powerplay.

While opener Liton Das went cheaply (6), Mohammad Naim played a sluggish T20 knock-in pursuit of 170 runs. However, Soumya continued his onslaught and fired Bangladesh to 85/1 in the nine overs.

Bangladesh needed 85 runs in the last seven overs and Soumya, who smashed his half-century in just 25 balls, was caught at long-on while trying to clear the rope.

Soumya's wicket triggered a collapse as Bangladesh lost Naim and skipper Mahmudullah in quick succession. In the last four overs, Bangladesh needed 60 runs but the visitors kept losing wickets at regular intervals and fell 28 runs short of the target.

Earlier after being asked to bat first, Kiwi openers Fin Allen and Martin Guptill put on 36 runs inside the first four overs, but Bangladesh made a strong comeback as the visitors reduced New Zealand to 55/3 in the seventh over. Allen (17), Guptill (21), and Devon Conway (15) departed in quick succession for the hosts.

Will Young and Phillips then got together at the crease and the duo put on 39 runs for the fourth wicket, but as soon as the time came to accelerate, the hosts faced another roadblock as Mahedi Hasan dismissed Young (14), reducing New Zealand to 94/4 in the 12th over.

With New Zealand's score at 102/4 in the 13th over, rain played spoilsport and the match had to be stopped. However, the break was not for long and the game resumed soon after. Phillips and Daryl Mitchell went berserk in the final overs and the duo accumulated runs at a brisk pace.

However, rain once again halted play in the 18th over with the New Zealand score being 173/5. The hosts were not able to bat for their full quota of 20 overs and as a result, after the DLS method, Bangladesh was given a target of 170 from 16 overs.