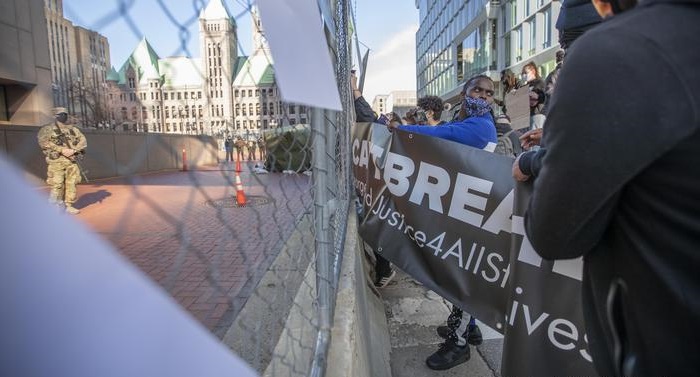 A jury was assembled at the Hennepin County Court on Monday, as the opening of the trial of former Minneapolis policeman Derek Chauvin got underway.

Chauvin is accused of murdering unarmed Black man George Floyd by kneeling on his neck – a killing that was caught on camera and which sparked outrage across the world.

The trial, in downtown Minneapolis, is expected to last some four weeks and is taking place under high-security conditions.

Relatives and lawyers for Floyd's family knelt in protest outside the courthouse, immediately ahead of the start of the hearing.

They took a knee for eight minutes and 46 seconds — the amount of time that Chauvin was seen kneeling on Floyd's neck in the video.


One of the prosecutors in the case, Jerry Blackwell, said Chauvin's actions had been at odds with what was expected of police.

"You will learn that on May 25 of 2020 Mr. Derek Chauvin betrayed his badge when he used excessive and unreasonable force upon the body of Mr. George Floyd," Blackwell said in his opening statement.

"That he put his knees upon his neck and his back, grinding and crushing him, until the very breath, no ladies and gentlemen, until the very life was squeezed out of him," Blackwell said.

Blackwell also said bystander witnesses included a Minneapolis Fire Department first responder who wanted to administer aid. The lawyer, who showed the jury the video of Chauvin pressing his knee into Floyd's neck, alleged that the officer pointed Mace self-defense spray at her.

"She wanted to check on his pulse, check on Mr. Floyd's well-being,'' Blackwell said. "She did her best to intervene. When she approached Mr. Chauvin... Mr. Chauvin reached for his Mace and pointed it in her direction. She couldn't help."

Defense says politics has no role

"There is no political or social cause in this courtroom," Defense attorney Eric Nelson said, rejecting charges of murder.

Nelson used his opening statement to describe the chaotic scene during the arrest.

He said Chauvin had only been following his training, and that the screaming of bystanders had caused officers "to divert their attention from the care of Mr. Floyd."

Nelson said drug use, heart disease, and high blood pressure, as well as the adrenaline flowing through his body, had all contributed to Floyd's death from a heart rhythm disturbance.

Final jury to be decided


Fifteen jurors were selected for the case. Hennepin County Judge Peter Cahill was required to drop one juror on Monday and proceed with 12 and two alternates.

A jury of 14 people is set to hear the case. Eight jurors are white and six are Black or multiracial, according to the court. Two of the 14 will be alternates, although the judge has not said which ones will be alternates and which will actually deliberate the case.

It is rare for police officers to be convicted in the US, when charges are brought against them.

President 'will be watching closely'


US President Joe Biden would closely monitor developments in the trial, his spokeswoman said on Monday.

"He certainly will be watching closely, as Americans across the country will be watching," Jen Psaki said. "At the time of George Floyd's death, he talked about this as being an event that really opened up a wound in the American public."

Family members of George Floyd attended a prayer service on Sunday night, hours before opening statements in the trial into his death were set to begin.

They were joined by national rights leaders such as Reverend Al Sharpton and Ben Crump, a civil rights attorney who also represents the Floyd family.

The death of Floyd, an African American, sparked a worldwide outcry against systemic racial discrimination in 2020.