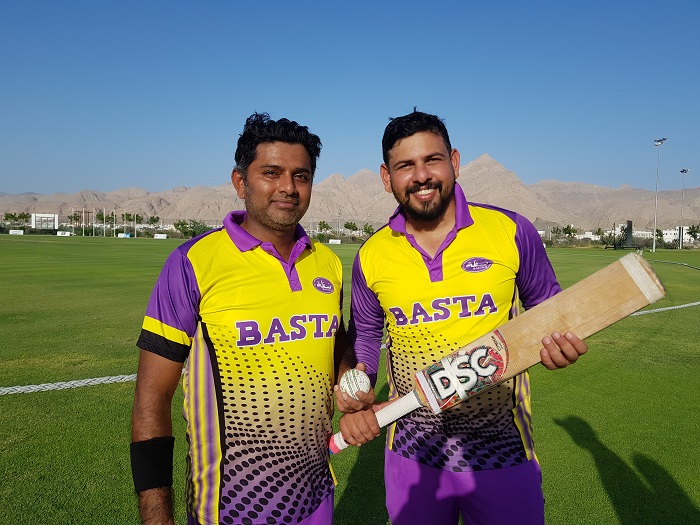 MUSCAT: Prabath struck a superb 71 not out to steer Sarco to an exciting 4-wicket win over Zawawi Powertech in an A Divisi0on T20 League match at OC Turf 1 in Amerat on Friday.

Opting to bat first, Zawawi posted 154 for 6 on the board in 20 overs thanks to main scores from Nishad KS (44) and Vijeesh Chennengadan (34). Sandip Patel, Sameer Mohammed and Dileepa Srilal took two wickets each.

Sarco fought back from being 0 for 2 in the first over to surpass the total in 18.2 overs, bolstered by a magnificent 71 not out by Pabath and Shahbaj Khan who slammed a breezy 25 not out off 14 balls. Nishad KS was the pick of the bowlers, taking 3 for 18 while Kalaiarasan Natarajan bagged 2 for 36.

Issa led E&amp;Y’s chase with a sparkling 56 while veteran Farhan Afzal contributed 41 before both departed quickly to slow down their team’s charge. E&amp;Y failed to maintain the momentum and was dismissed for 165 in the final over. Ibn Eameen picked up 3 for 26 while Zeeshan took 2 for 31.


Najeeb Shaheer’s splendid 78 and Nazish Mohammed’s 4 for 24 were the highlights of Basta CT’s thrilling 9-run win over ACT in an A Division T20 League match at OC Turf 2 on Friday.

Muhammed Zeeshan batted well for 63 off 44 but no other batsman managed to score big as ACT was restricted to 164 for 7 in 20 overs due largely to brilliant bowling by Nazish.


In another A Division T20 League game, Vijayanand Dhayanandan’s swashbuckling 78 off only 31 balls and Parameswaran Shakar’s 4 for 14 powered Awtad International to a huge 136-run victory against OCT Muscat at OC Turf 1 on Friday.

Vijay’s big knock included 7 sixes as Awtad collected 195 for 7 from the 20 overs it faced batting first. Aneermon Abdulrahman chipped in with a fluent 31. Arif Al balushi and Majid Hussein took two wickets each.

Facing a huge total, OCT Muscat collapsed with a fight, folding up for a dismal 59 in 19.4 overs. Apart from Parameswaran’s brilliant spell, Muhammed Irfan bowled well too, taking 3 for 6.