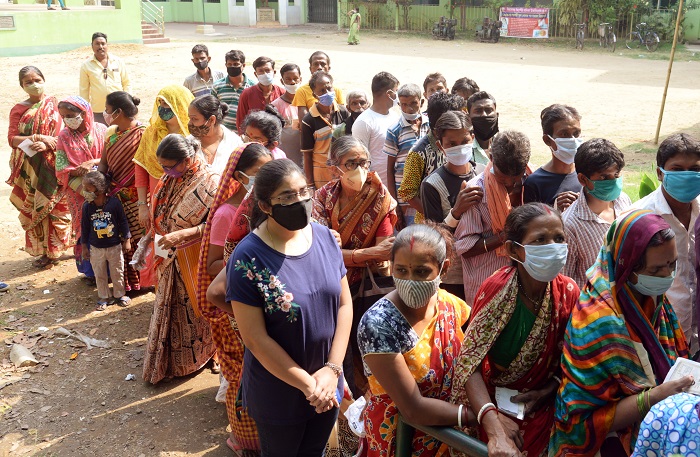 New Delhi: Prime Minister Narendra Modi has urged voters to turn out in record numbers and exercise their right to vote as polling for the first phase of assembly elections in West Bengal and Assam began on Saturday morning.

"Today, Phase 1 of the West Bengal Assembly elections begin. I would request all those who are voters in the seats polling today to exercise their franchise in record numbers," Prime Minister Modi said in a tweet. "The first phase of elections begin in Assam. Urging those eligible to vote in record numbers. I particularly call upon my young friends to vote," he added.

Union Home Minister Amit Shah urged citizens to vote fearlessly for the development of the states.

On the West Bengal elections, Shah tweeted: "I appeal to voters of the first phase to vote in record numbers fearlessly to restore the pride of Bengal." "Your one vote will create Bengal as imagined by great men like Subhash Chandra Bose, Gurudev Tagore and Shyama Prasad Mukherjee," he added.

"Today is the first phase of polling in Assam. I appeal to all brothers and sisters, especially the youth, to vote in large numbers to maintain peace, development and prosperity in the state. Your participation in this festival of democracy is the main pillar of the progress of Assam, so please vote," he said.

In the first phase of West Bengal elections, 30 seats covering all assembly constituencies from the districts of Purulia and Jhargram and a segment of Bankura, Purba Medinipur and Paschim Medinipur are going for polls.

The first phase of polling will decide the electoral fate of 191 candidates including 21 women.

The state is likely to witness a triangular contest this time with Trinamool Congress (TMC), Congress-Left alliance, and Bharatiya Janata Party (BJP) in the fray.

In Assam, polling is being held in 47 constituencies across 12 districts of the state.

A total of 264 candidates are in the fray for 47 seats -- 42 seats from 11 districts of Upper Assam and northern Assam region and five seats from central Assam's Nagaon district.

Out of these, 37 sitting MLAs are re-contesting including 24 from the Bharatiya Janata Party (BJP), six each from Congress and Asom Gana Parishad (AGP), and one from the All India United Democratic Front (AIUDF).