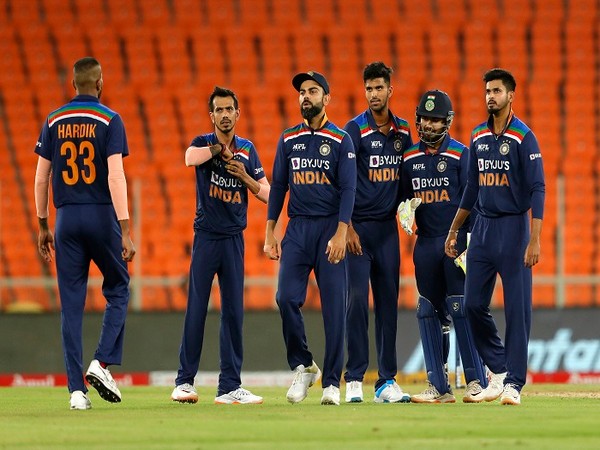 Ahmedabad: Having slumped to an eight-wicket defeat in the third T20I on Tuesday, Team India will once again look to claw back and level the five-match T20I series when they take on England at the Narendra Modi Stadium in the fourth T20I on Thursday.

With the visitors taking a 2-1 lead in the series, the fourth game is a must-win for Virat Kohli and boys and one of their biggest concern will be KL Rahul's form at the top of the order. The opener has managed to score just 1 run in the first three T20Is and even though both skipper Kohli and batting coach Vikram Rathour have backed him, the team management would definitely think about getting Shikhar Dhawan back at the top with Rohit Sharma.

"Well, I was going through a lean patch about two games ago. These things turn around very quickly. For us, he's (Rahul) been a champion player," Kohli told hosts' broadcasters after the second match.

Another focus point has been the toss. In all of the three T20Is, the team batting second has come out victorious and with this the pressure on the captain to win the toss has become all the more important. In fact, India skipper Virat Kohli made no bones in both the opening T20I and the third one that he too would have chased in both occasions.

Former England skipper Michael Vaughan on Tuesday said that it looked like the T20 World Cup, scheduled to be played later in India, could be won by the captain who has luck on his side at the toss.

Coming back to the fourth game, Kohli and boys must come out of their comfort zone and look to find a way to defend totals if they are looking to use this tournament as preparation ground for the T20 World Cup later in the year.

For the visitors, they seem to have ticked the boxes well and while Jason Roy was dismissed cheaply on Tuesday, Jos Buttler starred with the bat to see England home. It was almost as if Buttler wanted to show Kohli that he too can produce batting masterclasses just like the Indian skipper.

Only, in Buttler's case, there was more unorthodox and audacious shot-making on display as compared to the copybook shots that Kohli plays all around the wicket. If Buttler's handling of Yuzvendra Chahal on Tuesday night is anything to go by, the leg-spinner must get his act right going into the must-win game.

While the visitors do not really have a major area that they need to address, the Indian team definitely needs to ensure that the bowlers can adapt to the conditions on offer under lights and defend the total put on board by the batsmen.