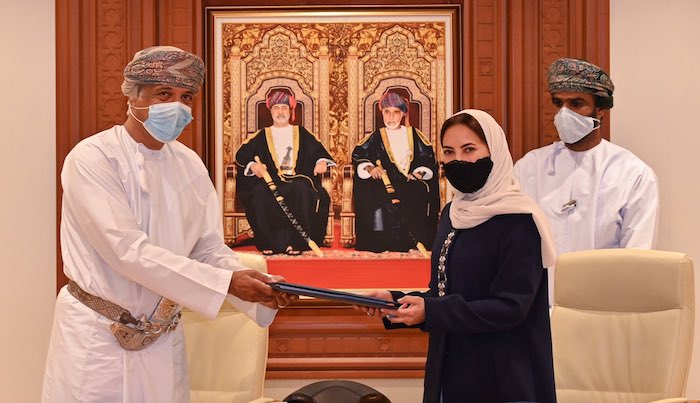 Muscat: An agreement has been signed between The Ministry of Heritage and Tourism and the Sultanate of Oman Pavilion Commission.

A statement issued online by the Ministry said: "The Ministry of Heritage and Tourism and the Sultanate of Oman Pavilion Commission sign an agreement for the Tourism Services and Information Centre on Oman at Expo 2020 Dubai. On the side of the ministry, the agreement was signed by HE Maitha bint Saif Al Mahrouqiyah, Undersecretary of the Ministry of Heritage and Tourism for Tourism. On the part of the Commission, His Excellency Mohsen bin Khamis Al Balushi, Adviser at the Ministry of Commerce , Industry and Investment Promotion, and Commissioner General of the Sultanate’s Pavilion at Expo2020-Dubai."

"Her Excellency the Undersecretary for Tourism has also signed a contract for the management and operation of the platform (Centre for Providing Tourism Services and Information) with Al-Raqi Business and Services Company represented by Mr. Raad bin Khalifa Al-Abri - CEO of the company, which is an Omani company (small and medium enterprise) specialised in providing information and tourism packages and promoting them at the centre."

"It should be noted that the Sultanate will participate in Expo 2020 Dubai alongside more than 190 countries under the slogan "Connecting Minds and Creating the Future", through a pavilion whose design is inspired by the Boswellia sacra, which has played a pioneering role in promoting Omani trade in the civilisations of the ancient world. The design tells the story of Oman throughout history."

"The Sultanate seeks, through participation, to embody the civilisational and humanitarian achievements of Oman throughout history, as well as highlighting the Sultanate's current achievements and its future aspirations,” the statement added.