A ‘treasure trove’ of antique collections in Al Buraimi 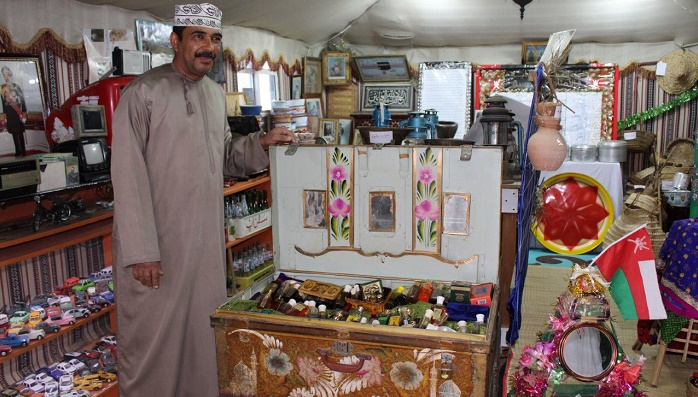 Ali bin Khalfan Al-Farsi, owner of the Archaeological and Traditional Collectibles Exhibition in the wilayat of Al Buraimi.

Muscat: The passion and love of ancient archaeological collections since childhood has led Ali bin Khalfan Al-Farsi, owner of the Archaeological and Traditional Collectibles Exhibition in the wilayat of Al Buraimi, to collect many archaeological items and ancient tools from various governorates of the Sultanate and to set up an exhibition for them.

Ali bin Khalfan Al-Farsi, the owner of the exhibition, said, “The idea started from a young age, but it was not in the way as it is known today, as the beginning was with the personal collection of ancient antiques, personal and heritage collectibles. The idea came to me to collect these items in one place which is the Majlis at my house.”

“I collected many archaeological holdings from various governorates and organised them in the exhibition, which was divided into pillars, including a corner for traditional weapons and electronics, another for pottery, Omani paintings, pictures, and Omani proverbs, and the exhibition took about a month,” he noted.

The oldest heritage collections, daggers, and traditional weapons date back to 1920, in addition to electronic collections and other old collectibles, Omani traditional clothing in various governorates of the Sultanate, and date palm products.

Al-Farsi aspires to develop his exhibition to make a heritage house in the wilayat of Al Buraimi, to be a facade for the wilayat, to introduce the people, visitors, and young people to the ancient heritage and ancient customs of the Sultanate.

Maryam bint Khalfan Al Bahlanyh, the wife of Al Farsi said, “The exhibition includes a special corner for Omani women who contributed to making it, such as traditional clothes, events, silverware and old perfumes.” She pointed out that Omani women have participated brilliantly in the manufacture of heritage, silverware that is part of the exhibition.

“The exhibition includes holdings from the various governorates of the Sultanate used by men and women, as well as another corner for Omani incense with its various types, and a corner for Omani dialects and words and their modern meanings,” she added.

Al-Bahlanyh stressed the importance of paying attention to Omani heritage exhibitions, which are based on individual or community initiatives, with the aim of developing and marketing them in the correct manner, preserving the Omani heritage, and introducing it to the future generations.