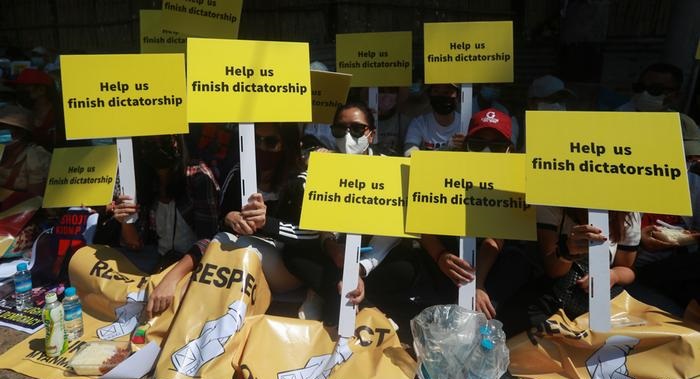 US President Joe Biden's administration on Friday granted temporary deportation protections and work permits to citizens of Myanmar living in the United States. The administration cited the recent military coup in Myanmar and political violence there against civilians as reasons behind the decision.

"Due to the military coup and security forces' brutal violence against civilians, the people of Burma (Myanmar) are suffering a complex and deteriorating humanitarian crisis in many parts of the country," Department of Homeland Security Secretary Alejandro Mayorkas said in a statement, adding he designated Myanmar for temporary protected status so that Myanmar "nationals and habitual residents may remain temporarily in the United States."

Temporary status protection is typically limited for a set period, such as 12 months, but can be extended if harsh political conditions continue. The Biden administration earlier this week issued temporary status protection to Venezuelans living in the United States for 18 months, due to the extraordinary political and economic crisis in their home country under President Nicholas Maduro.

US ramping up pressure on Myanmar military regime


The US decision to grant temporary deportation protections is a move in solidarity with the people of Myanmar facing off against the military regime that controls the country. Washington is also ramping up pressure against junta leaders. Myanmar's military, the Tatmadaw, seized power in a coup d'etat last month, arresting State Counselor Aung San Suu Kyi and other members of the ruling National League for Democracy party.

Earlier this week, the US initiated sanctions against family members of junta leader Min Aung Hlaing. The Treasury Department had previously sanctioned Min Aung Hlaing, along with five other leaders of the recently installed junta, freezing their US-based assets.

The United Kingdom and Canada have also implemented sanctions on Myanmar military leaders after the coup, with Australia suspending its defense cooperation program with the country.


All 15 nations of the UN Security Council on Wednesday backed a statement condemning the military government's crackdown on protesters following the coup. The backers include Russia and China, two countries, which had previously defended the actions of the military junta.

The statement expressed "deep concern at developments in Myanmar following the declaration of the state of emergency imposed by the military on 1 February and the arbitrary detention of members of the government, including State Counsellor Aung San Suu Kyi and President Win Myint and others."

The Security Council called on the military to "exercise utmost restraint" and refrain from violence.

According to data compiled by the Assistance Association for Political Prisoners, over 70 civilians in Myanmar have been killed since the February 1 coup, with more than 2,000 people having been arrested amid widespread demonstrations.