11 from same family have colorectal cancer in Oman 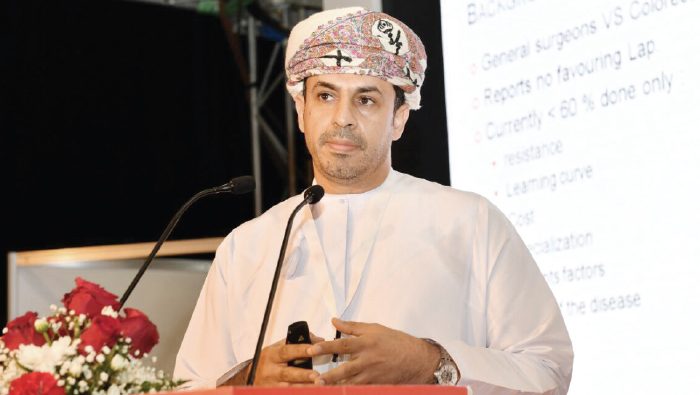 Muscat: Eleven people in Oman from the same family have been diagnosed with colorectal cancer, the head of general surgery, Dr Rashid Al Alawi at the Royal Hospital, has said.

Dr Rashid, a consultant surgeon added that there was a 44 per cent increase in cases of colorectal cancer in patients, between 2016 and 2017, and went on to say that this is among cancers whose detection rates are growing in the country.

“Colorectal cancer has taken priority and importance among healthcare providers in the country over the last 10 years,” he said.

“This is based on follow-ups done on the types of cancer seen in patients, and the extent to which their case numbers have increased.”

“In Oman, this was ranked fourth or fifth on the list of the most common types of cancer, about 10 or 15 years ago, but it has begun to rise up the ranks, and according to the latest statistics, which are from 2017, we have seen an increase from 151 colorectal cancer patients in 2016 to 218 cases in 2017, which is an increase of nearly 44 per cent,” Al Alawi added. This data came from the National Cancer Registry, which was established by Royal Decree in 1985. Al Alawi said that the numbers of colorectal cancer patients continued to increase in 2019 and 2020, and continue to rise.

“There are families in Oman where there are cases of cancer among multiple members of the same house,” he said.

“If there are incorrect practices we follow in our lives, whether in our daily habits, food consumption and other routines, they might enhance the incidence of this kind of cancer. There are also other factors determining the cause of this cancer, such as genetic or hereditary factors, and age, which cannot be controlled by people.”

“This increase was expected in the country, like in the rest of the world, because Oman’s population has become a lot younger over the years,” said the doctor. “Thanks to healthcare and better quality life, the life expectancy of people is on the rise. There is an expectation of an increase in colorectal cancer incidents, but the increase we’ve seen is greater than that which we expected,” he further added

While there are no scientific studies that help reveal the causes of colorectal cancer, research from different parts of the world show that although it does tend to affect people aged 50 and above, more and more younger people are also getting it. In Oman, people in their forties, thirties, and even twenties are being diagnosed with this condition.

“Because of incidences of colorectal cancer in people, the methods to diagnose them changed in countries such as the US and the UK, where they would initially make early diagnosis for people aged 55 and above,” he said.

“That age has now gone down to 50 years. Many countries around the world have made plans to provide early diagnosis for people over 45.” Al Alawi added, “In Oman, we conducted a simple analysis of data, and found that 45 per cent of people with colorectal cancer are less than 50 years old. The global percentage, however, ranges to only 10 to 15 percent among people aged 50 and below.”

People under the age of 50 being affected by colorectal cancer is prevalent in both Oman and the other Gulf countries, he noted. However, he added that there are a number of treatments that can be provided to patients.

“We would have liked for the symptoms of this kind of cancer to be made known, but colorectal cancer is present in the abdominal cavity, and is not often noticeable, seen or even felt, as is in the case of breast cancer,” explained the doctor.

“Tests can be done periodically, so over the years, colorectal cancer begins with a very small bulge, which then turns into a stroma. This stroma enlarges and turns into cancer.”

Explaining some of the symptoms associated with colorectal cancer, Al Alawi said, “If a person is lucky, and this cancer is detected either by chance or through a CT scan or colonoscopy, during advanced stages of the condition, a person with colorectal cancer feels pain, blockages or swelling in the abdomen, and blood flowing from the rectum, if the cancer is near the end of the colon or rectum. Unfortunately, however, there are no clear symptoms to detect whether a person has colorectal cancer.”

The doctor asked people in Oman to change the lifestyle factors under their control, whether they include a lack of physical activity, and consumption of fatty foods and red meat. The prevalence of diabetes is another factor that causes likelihood of colorectal cancer, as is obesity, smoking, and drinking alcohol.

There is, however, a cure for colorectal cancer, especially among people who have it due to genetic factors.

The earlier the diagnosis higher the chances of curing cancer patients.

“Progress in medical development has been made in surgical techniques and improvements in chemotherapy, which now causes fewer side effects,” said Al Alawi. “There has also been great evolution in radiotherapy, particularly in the case of colorectal cancers, and to cure cancers in general. Most countries will now do early examination for patients at the age of 45 or 50, so everyone who reaches this age must perform a stool sample analysis to verify whether there are traces of blood.”

“If the stromal carcinoma in the rectum or colon bleeds, then there is a high chance it will be detected during medical examinations,” he said. “The best way to examine oneself is through a diagnostic colonoscopy, so I advise everyone over the age of 40 to get one. If the results come back healthy, then there is no need to undergo examination for another five years at least, if the patient is among the category of those who are at greater risk of contracting this cancer.”