Off the boil Curry is fine, says Kerr 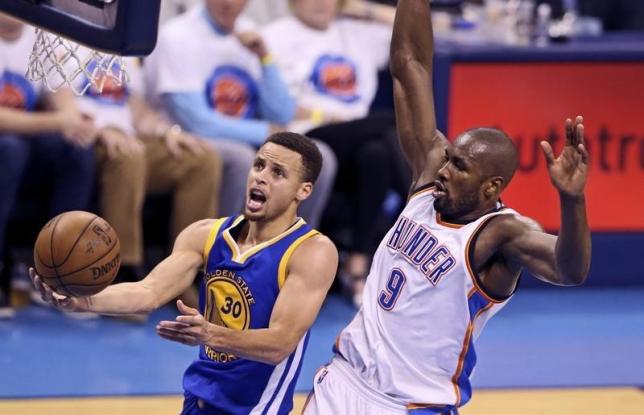 Golden State Warriors coach Steve Kerr has played down suggestions that point guard Stephen Curry is nursing an injury that is hampering his performances in the Western Conference Finals.
The Warriors, who set an NBA record of 73 wins in the regular season, trail the best-of-seven series 3-1 against the Oklahoma City Thunder, who have overpowered the defending champions.
Curry injured his right knee last month and website Yahoo Sports, citing an unnamed source, reported early on Wednesday the reigning Most Valuable Player is no more than 70 percent healthy, though Kerr later dismissed the report.
"Nobody has said anything about Steph being 70 percent to me not the training staff, relatives, friends or sources with knowledge of our teams thinking," Kerr told reporters. "I know he's not injured. If he were injured, he would not be playing."
Curry has played in six games since returning from injury and has appeared to have struggled in his last two, making only a combined 13 of 37 shots.
"The last couple of games he hasn't played as well as he can. He looked great in Game Two and he got free. Is he bothered a little bit by the layoff? Perhaps," Kerr added.
"He went three weeks without playing a game. He may not be quite where he needs to be, but its not an injury. That's the important thing to know.
"This is the playoffs. Everybody has injuries and you have to play through that stuff."
The Warriors will try to fend off elimination on Thursday as they return home for Game Five and Kerr said that was all they were focusing on.
"We feel very confident," Kerr said. "We have three games, two of them at home and we knew after we lost Game One that we would need to win one in OKC (Oklahoma City).
"We failed in our first two chances but we'll take care of business at home and have one more chance down there and see what happens."