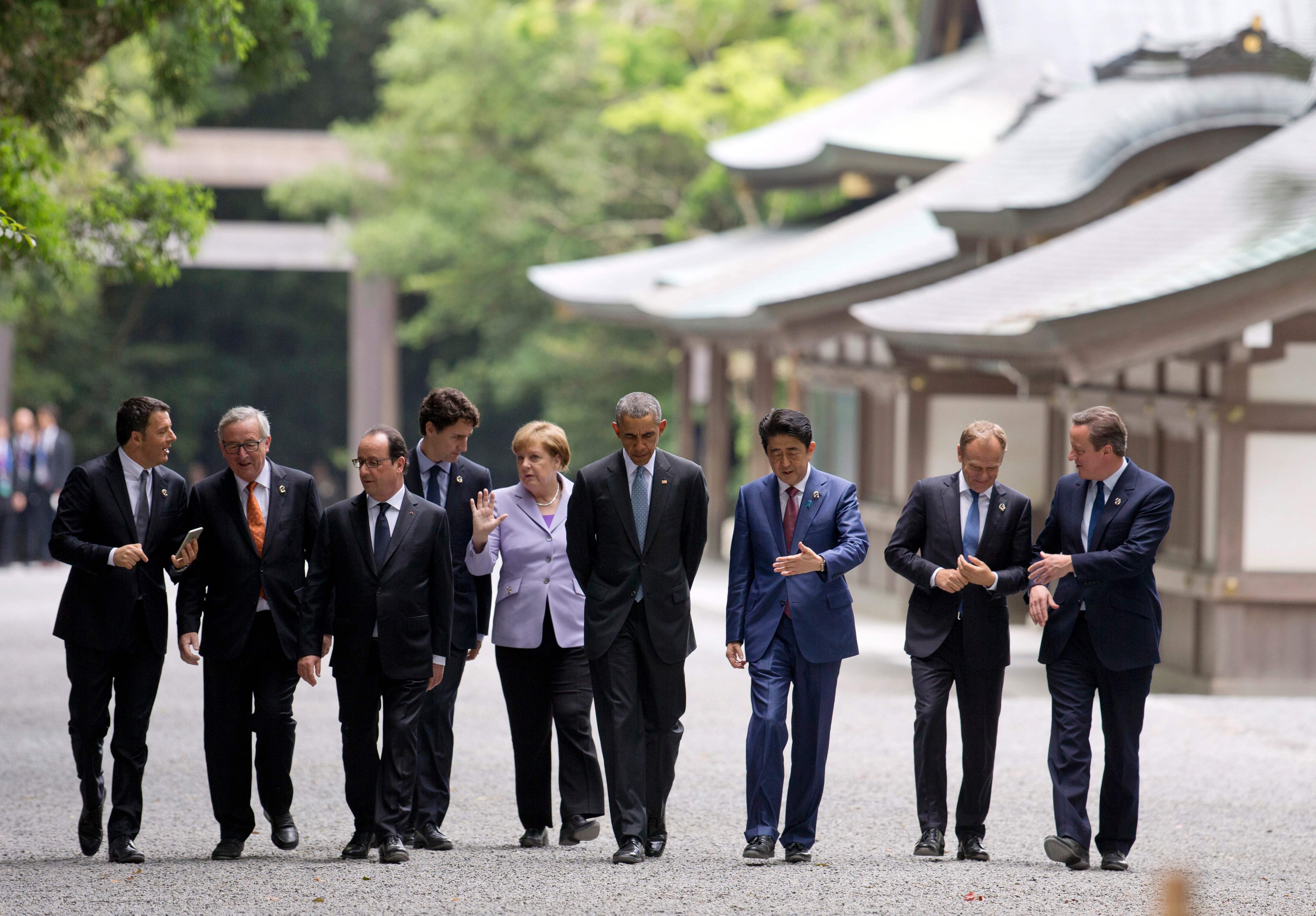 Ise-Shima: Japanese Prime Minster Shinzo Abe escorted Group of Seven (G7) leaders to the Shinto religion's holiest site on Thursday before a summit covering topics from risks to the global economy to refugees and China's maritime assertiveness.
Abe greeted U.S. President Barack Obama and other G7 partners one-by-one at Ise Grand Shrine in central Japan, dedicated to sun goddess Amaterasu Omikami, mythical ancestress of the emperor.
Led by a white-robed priest, each leader walked across a bridge, took part in a tree-planting ritual, strolled through the expansive grounds and posed for a group photo.
Abe has said he hopes the shrine visit will provide an insight to the heart of Japanese culture. Critics say he's catering to a conservative base that wants to put religion back in politics and revive traditional values.
Concerns about the health of the global economy and Europe's refugee crisis are among the top issues on the G7 agenda.
European Council President Donald Tusk said he would seek G7 support for more global aid for refugees.
"If we (G7) do not take the lead in managing this crisis, nobody would," Tusk told reporters. A flow of migrants from Syria and elsewhere to Europe has confronted the continent with its biggest refugee crisis since World War Two.
Other summit topics include terrorism, cyber security and maritime security, including China's increasing assertiveness in the East and South China Seas, where Beijing has territorial disputes with Japan and several Southeast Asian nations.
FLEXIBLE FISCAL POLICY
At a news conference late on Wednesday, Abe said Japan welcomed China's peaceful rise while repeating Tokyo's opposition to acts that try to change the status quo by force and urging respect of the rule of law - principles expected to be mentioned in a statement after the summit.
China's state-run Xinhua news agency told the G7 to keep out of its affairs.
"The G7, in order not to become obsolete and even negatively affect global peace and stability, should mind its own business rather than pointing fingers at others and fuelling conflicts," it said.
Although full agreement on macro-economic policy looks hard to come by, the G7 leaders are expected to promote monetary, fiscal and structural policies to spur growth in their communique when the summit ends.
With Britain and Germany resisting calls for fiscal stimulus, Abe will urge the G7 leaders to adopt a flexible fiscal policy, taking into account each country's own situation.
Abe hopes, some political insiders say, to use a G7 statement on the global economy as cover for a domestic fiscal package including the possible delay of a rise in the nation's sales tax to 10 percent from 8 percent planned for next April
The G7 leaders are also expected to reaffirm their previous commitment to stability in the foreign exchange market.
Obama was to make a statement and take questions from reporters at 6 p.m. (0900 GMT).
On Wednesday night, Abe met Obama for talks dominated by the arrest of a U.S. military base civilian worker in connection with the killing of a young woman on Japan's southern Okinawa island, reluctant host to the bulk of the U.S. military in Japan.
The attack has marred Obama's hopes of keeping his Japan trip strictly focused on his visit on Friday to Hiroshima, site of the world's first atomic bombing, to highlight reconciliation between the two former World War Two foes and his nuclear anti-proliferation agenda.
The G7 groups Britain, Canada, France, Germany, Italy, Japan and the United States.