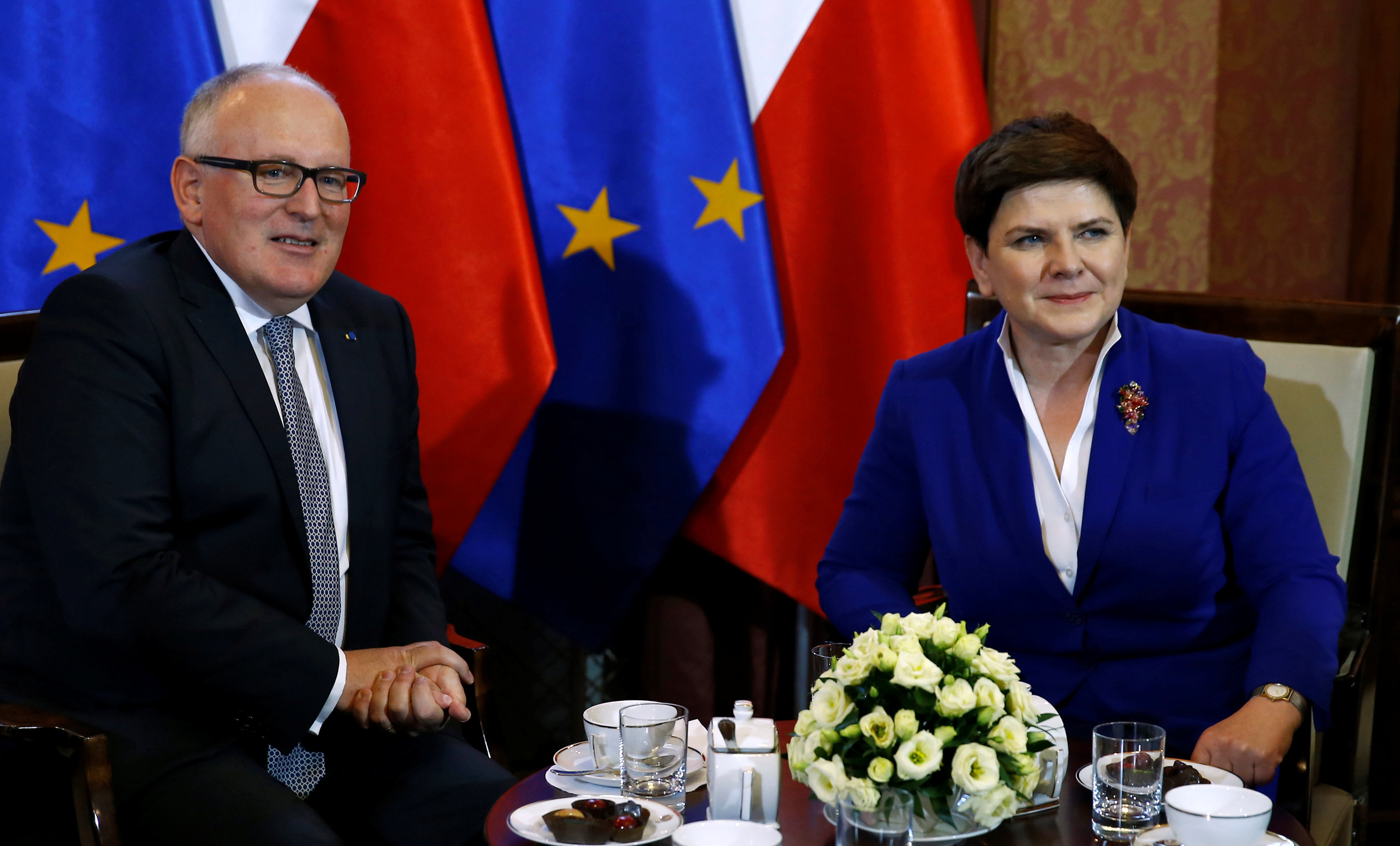 On a sunny day in Warsaw, it’s difficult to understand why the city’s well-kept streets simmer with anger and discontent over the European vision. The economy has been growing at 3.6 per cent, roughly twice the overall European rate. And there’s little or no influx of Syrian or Afghan refugees: Warsaw must be whiter than any other major city in Europe, including Budapest. Yet the far-right Law & Justice Party, led by Jaroslaw Kaczynski and known as PiS, bitterly denounces the European Union for invading Polish “sovereignty” -- language reminiscent of the advocates of British exit from the EU.
Poland is, or should be, Europe’s greatest success story. Repeatedly invaded and divided by other European powers, the country didn’t even exist between the late 18th century and the end of World War I. It was divided again when Hitler and Stalin both invaded in September 1939. The country’s post-Cold War independence seems like a miracle of Europe’s peaceful economic order.
As for its economy, Poland has grown steadily since 1989. Starting at Communist levels, its GDP per capita has marched inexorably in the direction of the European average, and now stands at more than two-thirds that level. Unemployment is low by European standards.
And Poland isn’t plagued by refugees. Why would you flee into the arms of Poland’s relatively ungenerous social safety network if you could get to Germany, much less Sweden? On top of that, Poland has balked at accepting Syrian refugees. For economic migrants and refugees alike, prospects seem better elsewhere in Europe.
So why the anti-European sentiment?
The superficial answer is that PiS’s defiance of Europe is a situational response to EU criticism of the party’s counter-democratic attempt to undermine the Polish constitutional court. On this theory, if the EU would shut up, PiS wouldn’t be anti-European.
There’s something to this: EU officials can sound paternalistic when lecturing newish democracies about safeguarding institutions.
But PiS’s anti-European rhetoric and instincts run deeper. They belong to a strand of nationalism whose adherents tell themselves they would be better off going it alone than allowing Brussels to dictate to them.
That nationalist story is tremendously significant -- and offers a powerful explanation of how you can have anti-Europeanism even with a good economy and no refugees. It has roots deep in Polish history, the same history from which the EU appears to have saved the country.
Poles are reared on tales of their repeated betrayals by European great powers, most prominently Russia and Germany. Today, an increasingly expansionist Russia again seems like a medium-term threat. As for Germany, it’s the main power in the EU, and perceived as such by Poles across the political spectrum, even those who love Europe.
Germany isn’t in the invasion business anymore. But economic dominance is still a form of dominance, one that nationalist Poles can be brought to resent.
PiS’s supports are logical targets for such anti-European nationalism. Nearly 6 million Poles, close to one-fifth of all eligible voters, cast ballots for the rightist party in last October’s elections. They didn’t skew young, but middle-aged and old. And most came from outside the big cities.
It’s plausible to conclude, therefore, that PiS voters feel left out of the Europeanizing process that has made Poland richer. It’s not that these voters weren’t lifted by the rising economic tide -- just that they haven’t benefited as much as urban elites.
Nationalism works by appealing to intuitions stemming from received cultural verities that don’t have to be historically accurate. So by its nature, nationalism activates feelings that resist rational arguments like: “Don’t worry, things are getting better gradually.”
You can see that nationalist-irrationalist strand in PiS’s detestation of Vladimir Putin. Kaczynski, the party leader, believes Putin engineered his twin brother’s death in a 2010 plane crash in Smolensk, Russia.
In fact, PiS’s values have a lot in common with Putin’s. Both favour social conservatism and state religion. Both hearken back to some aspects of an imagined Communist era where the state provided.
But because PiS is a Polish nationalist party, its script requires it to fear and hate Russia and Russia’s leader. Anything else would betray the understandable sentiment that flows from the history of Russian imperialism.
PiS’s anti-European (read: anti-German) feeling is analogous. It doesn’t derive from logic so much as from a powerfully felt victimhood. Unfortunately, that may hamper or even doom European efforts to press for a return to democratic practices. The outsider criticism may actually strengthen PiS by feeding nationalist sentiment.
Rationalists -- both of the left and the right -- like to believe that economic interests outweigh or at least shape ideology. I count myself among them.
But Poland today is a great reminder that we can’t attribute all nationalist political sentiment to purely economic causes. There’s more to human belief and action than bread alone. That’s worth remembering when trying to calculate the odds of success for PiS -- and for right-wing populism elsewhere in the world, not excluding the US. - Bloomberg View