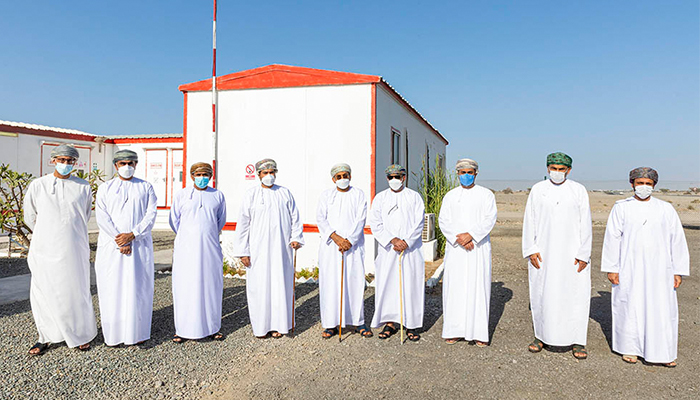 Ministers toured city to see its readiness in terms of infrastructure, key strategic projects, as well as milestones achieved

Muscat: Khazaen Economic City hosted a ministerial delegation along with key government officials toured the city to review its progress, infrastructural works, and study the scope it holds for varied domestic and foreign investments.

Khazaen Economic City received Qais bin Mohammed Al Yousef, Minister of Commerce, Industry and Investment Promotion, Dr Saud bin Ahmed Al Habsi, Minister of Agriculture, Fisheries and Water Resources, and Dr Khalfan bin Said Al Shuaili, Minister of Housing and Urban Planning. y saw the readiness of the city's infrastructure and learned more about the key strategic projects that Khazaen will host, such as the dry port and the Khazaen’s Food City including the Central Fruits and Vegetable market, in addition to the investment opportunities it will offer in the manufacturing, logistical and residential sectors.

As they toured the city to learn about Phase I of infrastructural works which was completed before its deadline of 2020 year-end, they were briefed on the various components of the city. This was followed by a comprehensive presentation by Khazaen officials on the city’s main components, incentives and facilities provided to various categories of domestic and foreign investors. Khazaen’s executive management also shed light on the city's plans and programs and highlighted the importance of this ambitious national project and its contribution towards supporting the government's goals and efforts in diversifying revenue sources for Oman’s economy.

Commenting on this visit, Khalid Al Balushi, CEO of Khazaen Economic City, said, “The visit of their excellencies the ministers to Khazaen is of great importance to us and pushes us forward to achieve greater milestones in developing this City as one of the main pillars that will support the national economy and contribute towards achieving goals of Oman Vision 2040."

The CEO added, “During this visit, Their Excellencies were briefed on the most important achievements of the City and the development it has witnessed, especially since the completion of Phase I and the relocation of several investors as well as businesses to Khazaen. Khazaen’s executive management also shed light on the main government projects that are envisaged to be implemented during the next phase according to plans approved by the government.”