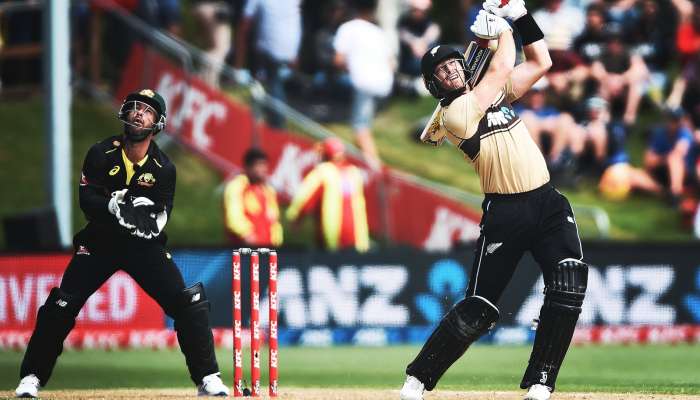 Dunedin: Marcus Stoinis' 78 off 37 balls and Daniel Sams' 41 off 15 balls weren't enough to help Australia secure a win as New Zealand emerged victorious in the second T20I by four runs on Thursday.

With this thrilling win, New Zealand has taken a 2-0 lead in the five-match T20I series. Martin Guptill returned to form with a sensational knock while James Neesham slammed 45 off 16 balls before Stoinis and Daniel almost got Australia over the line. Neesham dismissed both Stoinis and Daniel in the final over to help New Zealand secure a win in the second T20I. For the Kiwis, Mitchell Santner picked four, Neesham struck two while Tim Southee and Ish Sodhi picked a wicket each.

Chasing a mammoth 220, Australia got off to a good start as the visitors smashed 33 runs from the first three overs. But Southee removed Matthew Wade in the fourth over to put a break on Australia's chase.

But the visitors continued to bat freely and seven overs into the chase, Australia was 64/1 before Sodhi dismissed skipper Finch on the last ball of the eight over.

After the Finch's dismissal, Australia kept losing wickets at regular intervals and was soon found reeling at 113/6 before Stoinis and Daniel came out firing on cylinders. The duo stitched a 92-run stand for the seventh wicket in just 37 balls but New Zealand held their nerve in the final over to prevail

Earlier put in to bat first, New Zealand got off to a bad start as Kane Richardson struck with his first ball to dismiss Tim Seifert in the fourth over.

However, Guptill was in altogether a different mood on Thursday as he raced off to 37 in 23 balls to announce his return to form in style. New Zealand scored 45 runs in the first six overs with Guptill alone accounting for 37 of those. Guptill continued his scintillating batting and notched up his half-century in just 27 balls. A few blistering shots and the right-handed batsman moved to 70 off 37 balls as New Zealand went past the 100-run mark in the 11 overs.

Meanwhile, skipper Kane Williamson played the role of a second fiddle but Gutpill's flurry of boundaries brought up the 100-run partnership for New Zealand. Daniel Sams provided Australia the second breakthrough as Guptill fell three runs short of his century in the 15th over

In the next over, Adam Zampa dismissed Williamson but James Neesham smashed three sixes from his first four balls to steer New Zealand to a mammoth total despite wickets falling at the other end.