Great honour and privilege to be in IPL final: De Villiers 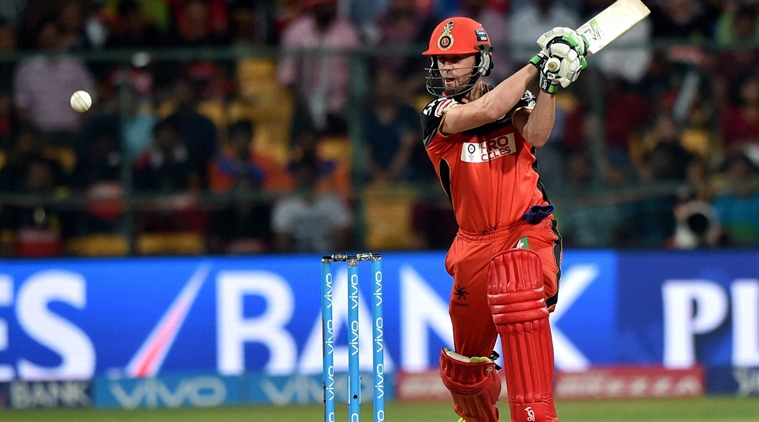 Bengaluru: One of the best batsmen in the world, AB de Villiers has played in very few finals of a tournament and he feels "honoured and privileged" to be featuring in the IPL summit clash after he guided Royal Challengers Bangalore to a four-wicket win over Gujarat Lions here.
De Villiers played a match-winning knock of an unbeaten 79 against the Lions in the semifinals here last night to pilot the RCB into the IPL summit clash on Sunday.
"To be in IPL final means much to me and I have not played in a lot of finals throughout my career. Having played for RCB for six years have not seen playing in finals. It is a great honour and privilege to be in the finals with this great franchise which has looked after me and the team over the years," de Villiers said at the post-match press conference.
"Lot of people were saying we were under performing but moments like this makes things worthwhile. We had a great team spirit for some years now, and have played some good cricket.
But never got to really enjoy the finals and hopefully we will win it but we don't know what's going to happen," he added.
Chasing 159 for a win, RCB looked down and out at 29 for five wickets, with Dhawal Kulkarni grabbing four of them, before de Villiers smashed 79 not out off 47 balls to script a sensational comeback and take the team home in 18.2 overs.
Asked about the semifinals victory, de Villiers said, "Kulkarni bowled a fantastic spell and lots of credit is going to go to him. He basically had the game in their (Lions') pockets.
"But like Zaheer Khan (his former RCB team-mate) always tells me it is a funny little game and you are never out of it. So, we always had a belief in the back of our minds. They almost won the game in powerplay and we just kept fighting, kept fighting," he said.
Asked if would rate his 79 not out as one of the best innings of his IPL career, de Villiers said he gives a damn about statistics but only concerned about helping the team to race past the winning post.
"I always said it. I honestly don't give a damn about any stats. I don't think anything about my hundreds or fifties. It was special for me to cross the line for the team and win a game. That is why I play this game," he said.
De Villiers said the Chinnaswamy wicket played funny and anything about 160 runs to chase would have spelt trouble for his team.
"Yes, it was funny kind of a wicket. While we were bowling, I thought anything above 160 we will be in trouble. The wicket didn't seem like a wicket we can go and score out there," he said.
De Villiers said after the fall of five wickets for just 29 runs on board, he felt there was a need of building a partnership to see RCB through.
"I always felt I needed a partnership and a foundation in the first six overs (to see the team through)," he said.
Asked about his unbeaten 91 runs partnership with Iqbal Abdullah, De Villiers said his junior team-mate was very calm-headed and showered praise for the fantastic partnership. "I had planned to talk to him. But, probably he — Abdullah — is calmer than me. He has done this before. He is a very calm head on his shoulders. Straightaway he missed one
and I was trying to tell him — to be very honest didn't need talking to him after that again. It was a fantastic partnership," he said.
On playing a risky shot as reverse sweep in a crunch situation, De Villiers said he plays the shot according to his instincts based on the long years of cricket experience he has. He also said he had discussed about it with captain Virat Kohli before going into bat and told the skipper he would go about it with his natural instincts.
"It is a funny thing. Virat and I actually spoke about it before our batting innings. He was full of energy, giving full of information and I told him Virat, I will just go naturally about it. I don't think too much and, he is a thinker. I am not a big thinker. I will try and assess what is going on and
don't think about it too much and I am never 100 per cent sure. It is very easy to say but also have got out playing the shot before," he said
"It is a fine line but I follow my instincts and try and watch the ball closely. I have played the game for many years and I know my talent will take over if I watch the ball and enjoy myself out there. We had a smile on our faces for most of our innings even though we were under lot of pressure. I have played long enough to know what is required for us to
cross the line and yeah so, instinct I would say," he said.
The South African batsman said the threat of rain hovering around gave the required momentum for the team to increase the run rate which made the spectators go berserk which eventually pumped him to go after the win.
"Virat sent a message that we have to be a little bit positive because of the rains were around and try to increase the run rate. Luckily that gave us momentum and this crowd was incredible. After that they got so pumped up and never going to lose it from there," he said.
Replying to a query on his bowling performance, Abdullah said Virat was a bowlers' delight who gives them freedom and self-belief and that has helped him do better.