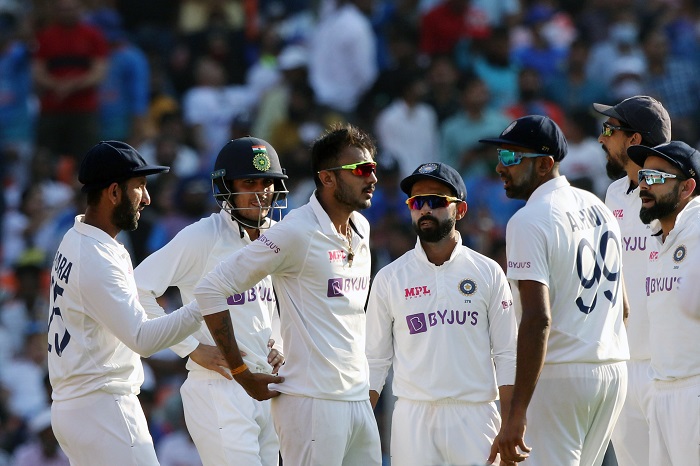 Ahmedabad: India openers Rohit Sharma and Shubman Gill batted out five overs in the tricky twilight phase as the hosts went into the dinner break in the driver's seat on the opening day of the pink-ball Test against England at the Narendra Modi Stadium on Wednesday.

At the dinner break, India's score read 5/0 with Rohit unbeaten on 5 and Gill yet to open his account. The hosts are trailing by 107 runs in the first innings with 10 wickets in the bag. England saw a glimmer of hope when Gill was caught off Stuart Broad in the slips by Ben Stokes, but the third umpire decided that the all-rounder had grassed the catch. The overtuning of the soft signal from the onfield umpire did disappoint the England players, but Gill's innings continued.

Earlier, hometown boy Axar Patel and seasoned off-spinner Ravichandran Ashwin had a field day as India bundled out England for a paltry 112 in the first innings.

Axar, playing in just his second Test, scalped six wickets while Ashwin returned with three wickets as the visitors were bowled out in just 48.4 overs. This was Axar's second five-wicket haul in a row as he had scalped five in the second innings of the second Test as well.

Skipper Virat Kohli might have lost the toss in the third Test, but his bowlers ensured that the hosts dominated the first session.

Resuming the second session at 81/4, England got off to the worst possible start as both Ben Stokes (6) and Ollie Pope (1) were sent back to the pavilion. Stokes was trapped plumb in front of the wickets and as a result, Axar was rewarded with his third wicket. Ashwin on the other hand sent Pope packing for just 1.

If the former England players were critical of the Chepauk wicket, the lack of application from the English batsmen in the first innings of the third Test can have no excuse.

Playing down the wrong line was the crux of the story and just like the top-order batsmen, Jofra Archer (11) too tried to cut a straight delivery and was clean bowled by Axar as the visitors were reduced to 93/7. This was Axar's fourth scalp in the innings.

Jack Leach (3), Stuart Broad (3), and Ben Foakes (12) all failed to stay at the crease for long and as a result, the hosts have given themselves the best possible chance to make this contest a one-sided affair.