US golfer Tiger Woods in hospital after car crash 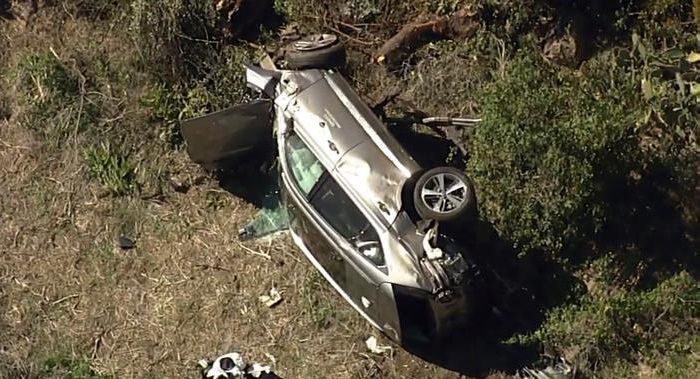 Woods sustained serious injuries to both of his legs in the crash, requiring surgery.

They said the 15-time golf major winner had to be "extricated from the wreck" by emergency services at the scene.

Woods, 45, was the sole occupant of the vehicle, the sheriff’s department said. He was taken away by ambulance to receive treatment at a local hospital.

At a press conference following the crash, authorities said there is currently "no evidence" that Woods was impaired at the time of the crash.

What has his team said?

"Tiger Woods was in a single-car accident this morning in California where he suffered multiple leg injuries," his manager, Mark Steinberg, said. He is currently in surgery and we thank you for your privacy and support."

His team tweeted that Woods "has undergone a long surgical procedure on his lower right leg and ankle after being brought to the hospital... He is currently awake, responsive and recovering in his hospital room."

Woods was in Los Angeles over the weekend as the tournament host of the Genesis Invitational at Riviera, where he presented the trophy.

He was to spend Monday and Tuesday filming with Discovery-owned GOLFTV, with whom he has an endorsement contract.

What has the reaction been to the crash?

News of the crash prompted an outpouring of support from athletes, celebrities and politicians.

Former US President Barack Obama wished Woods a "speedy recovery" on Twitter. "If we've learned anything over the years, it's to never count Tiger out."

Fellow PGA tour golfer Justin Thomas said he was "sick to his stomach" over the news, adding: "It hurts to see one of your ... closest friends get in an accident and I just hope he's alright."

Golfing great Jack Nicklaus said he was "deeply concerned" for Woods and offered him "our heartfelt support and prayers at this difficult time."

Woods has not played since December, when he took part in the PNC Championship in Orlando with his son, Charlie, who turned 12 earlier this month.

On 23 December he had his fifth back surgery and said last weekend that he was unsure whether he would be able to play in the Masters Tournament in April.

Police have opened an investigation into the crash.

This is the third time Woods has been involved in a car investigation. The most notorious took place in 2009 in the early morning after Thanksgiving, when his SUV ran over a fire hydrant and hit a tree.

In May 2017, Florida police found him asleep behind the wheel of a car parked awkwardly on the side of the road.