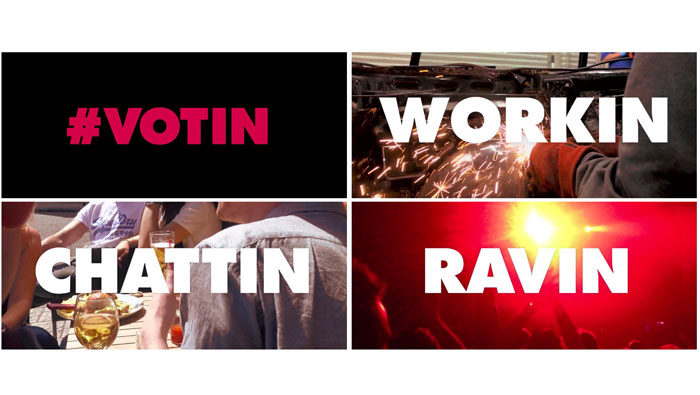 London: A campaign video urging young Britons to "make sure you're #VOTIN" to stay in the European Union in a June 23 referendum backfired on Wednesday, with some young people denouncing it as patronising.
Produced by the official "In" campaign, the new video aims to motivate young people to turn out on referendum day. Surveys show they are more likely to be in favour of remaining in the EU but less likely to vote than people in other age groups.
To a soundtrack of thumping dance music, the video shows images of young people engaging in a range of activities from texting and withdrawing cash to clubbing, spraying graffiti and parachuting.
Over these fast-moving images, a series of verbs appear one after the other in capital letters: WORKIN, LEARNIN, EARNIN, SHOPPIN, RAVIN, CHATTIN, ROAMIN, MAKIN, MEETIN, SHARIN, GOIN, LIVIN. Each time, the letters IN appear with a slight delay.
A message then flashes up: "Life's better in the EU, but it's at risk. 23rd June, make sure you're #VOTIN".
The video plays on the word "IN", but the decision to drop the letter G from the end of all the verbs was also widely seen as an attempt to mimic the way some young people talk.
"I quite liked the energy that it had, but its downfall was that it was quite patronising. You have to give more credit to young people," said Jordan Andrews, a 24-year-old law student working on his laptop at a cafe in London.
"It would have been better, more respectful to have the whole verb, voting, with the 'in' highlighted," said Andrews, who is undecided about which way to vote on June 23.
On Twitter, some users used the hashtag #cringin to share their views.
"Whether your in your 10's, 20's or 30's, you can smell an ad campaign written by a 50 year old a mile offin," wrote user Matt Holman.
The official Vote Leave campaign tweeted an image lifted from the campaign, with the slogan "PATRONISIN CRINGIN EMBARRASSIN #VOTIN".
The anti-EU camp has come in for its share of ridicule during the campaign, for example over two attempts to set up music festivals in support of the Brexit cause that unravelled when popular acts pulled out over the political content.
A spokesman for the official "Britain Stronger In Europe" campaign declined to comment on the criticism of the #VOTIN video, while some Twitter users defended it, saying that much of the mockery was coming from middle-aged political journalists.
The stakes are high for the "In" camp, with some evidence that young people are not as engaged in the referendum debate as it would need to ensure victory.
A survey of 2,000 students published last week found that 63 per cent of them did not know the exact date of the referendum, while 54 per cent were not aware it was being held in June.
Sam Gyimah, who is leading the #VOTIN campaign, wrote in the Huffington Post that young people - including those used to taking European city breaks by budget airlines - had most to lose from a British exit from the EU.
"As the #VOTIN launch video points out, whether it is 'learnin', 'travellin', 'sharin' - the 'easyjet generation' takes being in the EU for granted on so many levels, and reaps the biggest rewards from our membership," said Gyimah, a junior minister and Conservative member of parliament.
Law student Andrews said the video had not persuaded him to vote to remain in the bloc. "Concrete issues would have been better. It obscured the actual debate," he said.