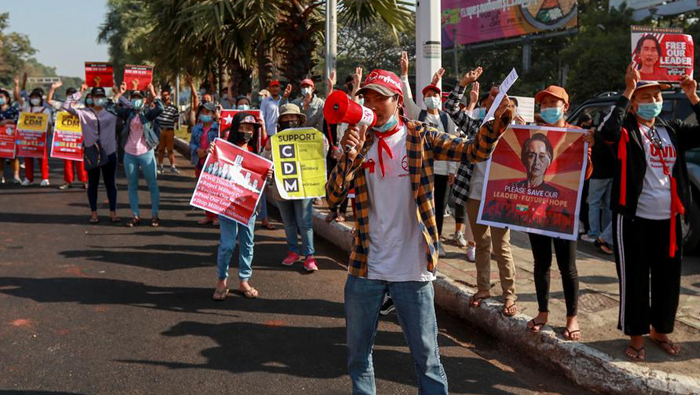 Naypyitaw: Following the coup in Myanmar on February 1, many people were in a stupor. But this didn't last long.

Less than 72 hours after the military took power, people across the country took to the county's most popular social media platform, Facebook, to articulate their anger and frustration at the military takeover.

The protesters soon moved from comment sections into the streets. More than two weeks after the coup, these anti-junta demonstrations seem to be growing more vociferous by the day.

At the heart of the demonstrations is "Generation Z," a broad demographic of people born between the late 90s and 2012.

Generation Z is opposing the country's slip back into military rule after a brief period of democracy. They appear self-confident, warning the military: "You messed with the wrong generation."

Who is Myanmar's Generation Z?


Myanmar historian Thant Myint-U wrote recently in the Financial Times that a "gerontocracy and a narrowed focus on elections and the constitution" has "crippled" Myanmar.

He said both the military and ousted leader Aung San Suu Kyi and her National League for Democracy (NLD) are to blame. He hopes the younger generation will be able to change the course.

Myanmar's Generation Z is an important demographic, and covers broad swaths of the economy. Its members are doctors and nurses, artists, bankers, railroad workers, teachers, LGBTQ activists, trade unions, students and many other social groups who have joined the protest.

The groups partially overlap and work together, but they also have different aspirations.

The current demonstrations are also fueled by celebrities like actors, musicians and bloggers. Burmese in exile, for example in Thailand and the United States, also play an important role in supporting the protests on social media.


The demonstrators' courage and determination come against the historical backdrop of violent suppression during Myanmar's last military coup in 1988.

The protesters know that the military can carry out arbitrary arrests and that a planned "cybersecurity law" will make it harder to organise and speak out online.

Last Sunday, the military used armored vehicles to counter the protesters in Yangon and since then the number of demonstrators on the streets has slightly decreased.

The demonstrators are united in rejecting the military dictatorship. However, they do not yet have a common idea as to what Myanmar should look like in the future. In many ways, the movement today is similar to the 1988 protest movement.

At that time, a broad alliance was formed that was united around the general rejection of the military and enthusiasm for Aung San Suu Kyi. However, that movement was unsuccessful.

Strikes are a double-edged sword


Although the current street protests are a visible sign of discontent, the civil disobedience campaign has had a stronger impact.

Many banks are closed, airports are operating at reduced capacity, trains have stopped running, and containers are piling up in the port of Yangon.

However, these shutdowns hit the general population, and especially the poor, much harder than the military.

If the banks stop transferring phone bills to the military-controlled company "MyTel", the generals could feel the effect. But at the same time, tens of thousands of textile workers are not receiving paychecks if the banks are closed. And when doctors at Yangon General Hospital strike, they are cutting off the poorest people from medical care.

The military has its own banks, schools, and hospitals. It can use this asymmetry to its advantage in the long run.

Anger is not enough


Political scientist Min Zin, who was 14 when he joined the 1988 protests and later went into exile, now works as a Myanmar analyst.

Zin recently told the New York Times that "public pressure alone cannot lead to a real political transition. Without a well-thought-out strategy to achieve concrete goals, sooner or later we will always end up on the side of repression and under some form of military rule."

Other observers in Myanmar told DW, under the condition of anonymity due to security concerns, that the decisive factor for success this time around will be whether the protest movement is better organized and coordinated.

There is no sign of the military giving in. The stamina of the demonstrators in sticking it out for a long period is therefore critical.

Anger has mostly driven the call to action over the past two weeks. However, eventually, anger wears off and gives way to exhaustion. Protesters will need a long-term strategy. Leaders and demonstrators should plan for rest periods without taking the momentum out of the movement.


In recent years, expectations for democracy in Myanmar at home and abroad have been greatly exaggerated.

This is particularly true in the case of Suu Kyi, who was turned into a human rights icon by her supporters abroad before she lost this status because of her passive stance on the expulsion of the Rohingya.