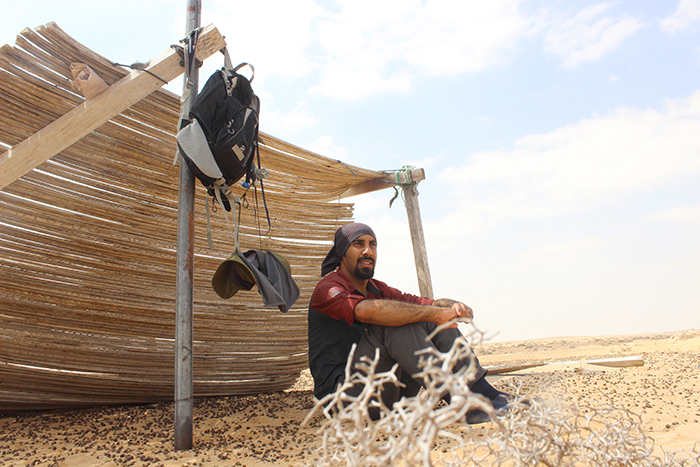 Four Omanis recently crossed the deserts of the Sharqiyah sands on foot to encourage the country’s youth to look beyond their limits, and show them that anything is possible with a little bit of intelligence and determination.

When Mohammed Al Jawahari set out on his expeditions across the desert, his thoughts were solely focused on one objective: getting through to the other side. As the heat danced around him and his three companions, and threw shadows that at times seemed to mock their efforts, while intermittent winds kicked sand into their faces in an attempt to obscure their vision and compel them to turn back, Mohammed and his three fellow Omanis treated these challenges with little more than casual indifference, proceeding almost cheerfully through the soft sand in the direction of their destination, a Bedouin rest house just outside the town of Bidiyah, in the governorate of North Ash Sharqiyah.

“My main aim is to promote Oman and to encourage the youth to take on challenges in order for them to unlock their potentials, so that they realise they are capable of achieving more than their current limitations,” said Mohammed.

“As part of this objective, there is another message I want to promote to the community: outdoor adventure and exploration plays a very important role in our development. It is important we motivate them to pursue more activities outside their comfort zone,” he added.

The four Omanis set off on the 10th of February from Qahid Mosque, situated on the shores of the Arabian Sea, heading towards the village of Tawi Hamad, located in the midst of the sands, a significant checkpoint on their route.

Covering about 25km a day on their 150km journey, they reached Bidiyah in five days, stopping for the day only after the sun had set. Each of the young men on the journey would take it in turns to cook, while the rest of them would set up camp for the night.

“Why is it important to motivate the youth to involve in outdoor activities and adventures?” asked Mohammed. “This is in order for them to develop various skills such as being more confident, learning independence, and understand the importance of qualities such as good communication skills, time management, positivity, and humanity.”

His trip across the Sharqiyah Sands came just months after another such excursion, when he accompanied Omani traveller, Ahmed Al Mahrouqi, on his travels from Adam in the interior Dakhiliyah Governorate to the capital of Muscat, for the same purpose as Mohammed. While Ahmed and his troupe rode on camelback, Mohammed walked side by side with them.

That trip was also organised to commemorate Oman’s 50th National Day, which fell on November 18 last year. Having returned from the harsh desert sands, Mohammed is already planning his next journey, which is rather different to the one he just undertook.

He plans on hiking across the western section of the Hajar Mountains, taking the same paths goatherds used to travel on while grazing their flocks.

“I ask everyone to be a part of this adventure in spirit, by sharing my experiences with others, in the hope that they are inspired by them,” he said. –[email protected]