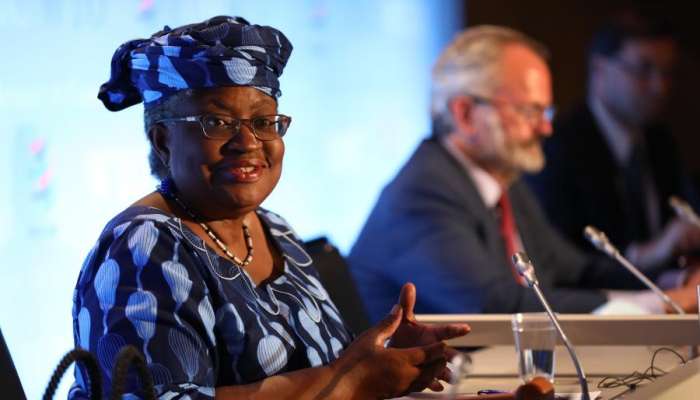 GENEVA: Members of the World Trade Organization (WTO) on Monday agreed by consensus to appoint Ngozi Okonjo-Iweala, a former finance minister of Nigeria, as the next director-general, said the WTO in a press release.

The decision was made at a special meeting of the WTO's General Council at which the World Bank veteran was formally selected.

"Dr. Okonjo-Iweala will become the first woman and the first African to head the WTO. She will take up her duties on March 1 and her term, renewable, will expire on Aug. 31, 2025," WTO said.

"I am honored to have been selected by WTO members as WTO director-general," said Okonjo-Iweala to the General Council, underlining that "a strong WTO is vital if we are to recover fully and rapidly from the devastation wrought by the COVID-19 pandemic."

"I look forward to working with members to shape and implement the policy responses we need to get the global economy going again. Our organization faces a great many challenges but working together we can collectively make the WTO stronger, more agile and better adapted to the realities of today," she said.

Okonjo-Iweala, 66, is a global finance expert, an economist and an international development professional with over 30 years of experience working around the world.

Twice served as Nigeria's finance minister and briefly acted as foreign minister, she has a 25-year career at the World Bank, including as Managing Director of Operations.

Extending the "warmest congratulations" to Okonjo-Iweala, General Council Chair David Walker said that "this is a very significant moment for the WTO."

"I am certain that all members will work with you constructively during your tenure as director-general to shape the future of this organization," he added.

Applauding the "timely" appointment, China's Ambassador to the WTO Li Chenggang noted that "the collective decision made by the entire membership demonstrates a vote of trust not only in Dr. Ngozi herself, but also in our vision, our expectation and the multilateral trading system that we all believe and preserve."

"As a contributor and beneficiary of a stable, non-discriminatory and rules-based multilateral trading system, China does believe trade, mutually-advantageous trade, will be a key tool that can help us to find a way out of the current situation and realize economic recovery soon," he added.

The General Council decision follows months of uncertainty triggered by the initial refusal of the United States to join the consensus around Okonjo-Iweala, throwing its support behind South Korea's Trade Minister Yoo Myung-hee instead.

On Feb. 5, Yoo decided to withdraw her candidacy and the new U.S. administration of President Joe Biden announced that Washington would extend its "strong support" to the candidacy of Okonjo-Iweala.