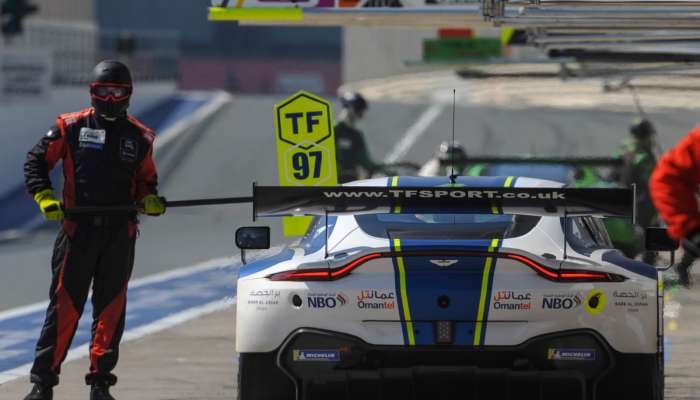 Muscat: Ahmad Al Harthy and Oman Racing chalked-up a second top seven finish in as many races at Dubai Autodrome on Sunday, February 14, to get the Omani’s maiden Asian Le Mans Series campaign off to a consistent start.

Having raced from 10th on the grid to seventh in the GT class during round one on Saturday, February 13, Al Harthy and team-mates Jonny Adam and Tom Canning were on course for a potential podium in race two on Sunday – but an unfortunate drive-through penalty proved costly.

Even so, a well-crafted opening stint from Oman Ministry of Culture, Sports and Youth, National Bank of Oman, Omantel and Barr Al Jissah backed racer Al Harthy, and suitably strong performances from Canning and Adam, ensured Oman Racing added another seventh place to its event tally.

“Our performance was very good and much, much better than Saturday – we were really happy with our overall pace”, said Al Harthy after round two, “Realistically, without the drive-through, I think we could have had a possible podium, or at the very least challenged for the podium, which would’ve been amazing on our first weekend in the Asian Le Mans Series.

“Although the result is the same as race one, there are a lot more positives for us to take away from here to the next two rounds in Abu Dhabi a few days from now. We go there feeling more confident as Yas Marina Circuit should suit our Aston Martin much better.”

As on Saturday, Al Harthy launched well at the rolling start of race two and from eighth on the GT class grid he moved into seventh before tucking back in to eighth place. He then circulated for the first couple of laps in a very tight pack of cars all jostling for position.

Very close behind Ralf Bohn’s Porsche 911 on lap three, Al Harthy had a look at making a move the next time around but thought better of it as the door was closed. Redoubling his efforts, the Omani went to pass at the Turn 14 left-hander but as the Porsche turned in there was contact. Taking seventh momentarily, the resulting delay ultimately dropped the No.97 Aston Martin back to ninth.

Able to climb back into the top eight soon after, a Full Course Yellow period on lap nine led to a number of cars making unscheduled pit visits. Al Harthy stayed on track and when racing resumed he moved up into the top five with less than 25 minutes of action complete. Another FCY period on lap 17 led to a similar scenario, Al Harthy staying out and ultimately moving into the GT class lead.

As the end of the first hour approached, though, the complexion of the race changed for Oman Racing when officials served the squad with a drive-through penalty for the lap four contact. After taking the penalty, he pitted again the next time around from fifth in class to hand over to Canning.

Joining the race in 10th position in GT, the Briton had an eight second gap to make up to the Ferrari F488 of Patrick Kujala and he did reduce the deficit during his stint. As some pit-stops were served, Canning moved up into the top six and as the end of hour two approached he was up into third.

Canning pitted a couple of minutes before the halfway point and Adam climbed aboard the No.97 Aston Martin – which was also refueled and had a change of tyres – and he joined the action in 13th position. Within a quarter of an hour he was back inside the top 10, and then into the top eight.

As the end of hour three neared, Adam had climbed into fourth position with rival squads already taking their final pit-stops. Ultimately moving into the GT class lead with around 50 minutes to run, the Scotsman then made Oman Racing’s last pit visit. Threading back into the race in 10th position, Adam climbed through to seventh before the chequered flag at the end of the four hours.

There is absolutely no time to rest for Al Harthy and Oman Racing, with rounds three and four of the Middle-East-based 2021 Asian Le Mans Series taking place this coming Friday, 19th February, and Saturday, 20th February, at Yas Marina Circuit in Abu Dhabi.