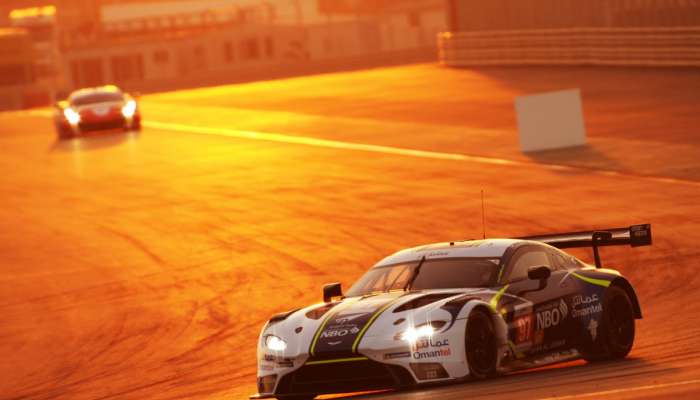 Dubai: Race one of the Asian Le Mans Series delivered a respectable and very positive seventh place finish for Ahmad Al Harthy and the Oman Racing team at Dubai Autodrome on Saturday, February13, to get the 2021 season off to a satisfying start.

Beginning the championship curtain-raiser from 10th on the GT grid, from 19 class entries, Omani star Al Harthy took the opening stint of the four-hour race at the wheel of the No.97 Aston Martin Vantage GT3 and performed very competitively on his maiden race outing in the ALMS.

Making immediate progress by gaining two places on lap one alone to move into eighth, the Oman Ministry of Culture, Sports and Youth, National Bank of Oman, Omantel and Barr Al Jissah supported racer then managed to usurp the No.51 AF Corse Ferrari for seventh after a fairly lengthy battle.

Although edged back a couple of positions later in his stint, Al Harthy continued to lap strongly and handed the TF Sport-prepared Oman Racing Aston Martin over to British youngster Tom Canning for the second hour at the 5.39-kilometre track.

Initially running in 10th position, Canning soon took ninth and with 90 minutes of action elapsed the Aston Martin Academy driver was right behind the Walkenhorst Motorsport BMW M6. Climbing up into seventh during the second half of his stint, at the midway point of the race – with a cautionary Full Course Yellow period in force – Canning pitted.

Jonny Adam climbed into the cockpit for his first race mileage of the weekend and the Aston Martin factory driver held 10th place behind the No.55 Ferrari of Davide Rigon. As both cars moved up the order, Adam taking ninth, he remained stuck behind his Rinaldi Racing rival.

Making an earlier final pit-stop as a result of the time delay, Adam managed to jump Rigon and ultimately concluded the race under the rapidly darkening evening Dubai skies in seventh – less than eight seconds shy of the top six and some 14 seconds ahead of Rigon’s Ferrari.

“What a race it was”, said Al Harthy, “We all drove really well, it’s very, very tough out here in the Asian Le Mans Series so I think we can be happy with P7 in our first race – it’s a very respectable first race in the championship for Oman Racing as part of a very strong grid. I wish I’d cleared the Ferrari two or three laps sooner in my stint, but we weren’t far off at all and I think I did a good job.

“It was a fast race actually, only one Full Course Yellow period I think in the entire four hours which shows the level we’re racing at. To be honest, I’m satisfied with P7 on my debut in the ALMS as we finished ahead of some very strong and professional line-ups.”

Of course, race two of the Asian Le Mans Series – also run over a duration of four hours – will take place at Dubai Autodrome today, Sunday, 14th February, with the encounter getting underway at 12.45 local time. Al Harthy and all at Oman Racing are focused on more improvements for round two, with the experience from Saturday’s contest certain to prove crucial.

“We worked overnight on seeing what improvements we could make ready for race two, I’m really looking forward to it and feeling positive”, added the Omani, “If we can make more progress again, and that’s what Jonny, Tom and I are all focused on, it will be a strong first weekend overall for us in this incredibly competitive championship.”