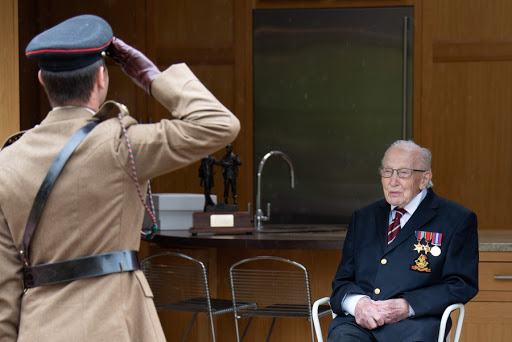 In a statement confirming his death, his daughters said that he had been suffering from pneumonia during the past weeks and tested positive for COVID-19.

He had been taken to hospital in Bedfordshire, east England, when he needed help with his breathing at the weekend. His family said they were with him on Monday night during the last hours of his life.

"The last year of our father's life was nothing short of remarkable. He was rejuvenated and experienced things he'd only ever dreamed of." said the family statement.

His fundraising efforts won the country's hearts and he was knighted by the Queen in July.

A Buckingham Palace spokesperson said Tuesday that the Queen sent private message of condolence to the family of Tom Moore.

British Health Secretary Matt Hancock was one of the first senior British officials to pay tribute to the pensioner hero, saying on his social media site: "I'm so sorry to hear that Captain Tom has passed away in hospital. He was a great British hero that showed the best of our country and I send my best wishes to his family at this time."

Number 10 Downing Street will lower the flag to half mast in tribute to him, reported the BBC.

Moore passed away as the total number of coronavirus cases in the country stood at 3,852,623 on Tuesday. The anti-COVID fight he backed last year is still going on in Britain.

England is currently under the third national lockdown since the outbreak of the pandemic in the country. Similar restriction measures are also in place in Scotland, Wales and Northern Ireland.

To bring life back to normal, countries such as Britain, China, Germany, Russia and the United States have been racing against time to roll out coronavirus vaccines.