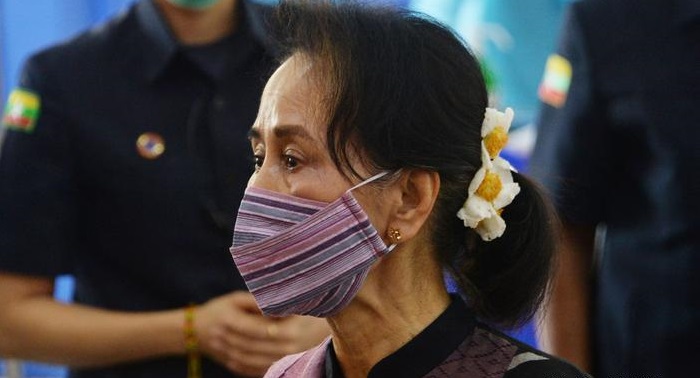 Myanmar's police filed charges against ousted and detained leader Aung San Suu Kyi on Wednesday for breaches of the country's import and export law, according to a police document.

The police are seeking her detention until February 15.

Military officers who searched Suu Kyi's residence found hand-held radios that were imported illegally and used without permission, the document from a police station in the capital Naypyitaw said.

A separate document showed police filed charges against ousted President Win Myint for offenses under the Disaster Management Law. Reports say he is alleged to have broken COVID-19 rules during a campaign rally.

The army declared a one-year state of emergency. It said authorities had failed to resolve allegations of fraud in November's election. Suu Kyi's National League for Democracy (NLD) party won the vote by a landslide.

Suu Kyi has not been seen since her arrest. NLD party spokesman Kyi Toe said she was in good health at a separate location and would stay there for the time being. His comments cannot be immediately be confirmed.


The NLD on Wednesday said its offices in several regions of the country had been raided, and documents, computers and laptops seized.

The raids started on Tuesday, the party said in a statement on Facebook.

It urged authorities to stop what it said were unlawful acts.

The military government will also prioritize the COVID-19 outbreak and the economy, a state newspaper reported on Wednesday.


The G7 nations and the EU said they were "united in condemning the coup in Myanmar," in a statement on Wednesday.

"We are deeply concerned by the detention of political leaders and civil society activists, including State Counsellor Aung San Suu Kyi and President Win Myint, and targeting of the media," foreign ministers from Canada, France, Germany, Italy, Japan, the UK and the US, together with the EU High Representative said.

The foreign ministers called on the military "to immediately end the state of emergency, restore power to the democratically elected government ... and to respect human rights and the rule of law."

People who are "unjustly detained" should be released, the lawmakers added.

Several of the G7 nations, including Germany and the US had already spoken out independently against the military takeover, ahead of Wednesday's joint statement.

Sanctions on the cards?


French Foreign Minister Jean-Yves Le Drian said that "additional sanctions will have to be considered at a European level" if the situation continues, in comments to French broadcaster Europe1 on Wednesday.

In 2018, the EU imposed sanctions against generals in Myanmarover killings of Rohingya Muslims. The EU also has an arms embargo on the Southeast Asian country.

China's Foreign Ministry on Wednesday said "relevant theories" that it supported or gave tacit consent to the coup "are not true."

"As Myanmar's friendly neighboring country, we wish that all sides in Myanmar can appropriately resolve their differences, and uphold political and social stability," Foreign Ministry spokesman Wang Wenbin said at a daily briefing.

Dr. Avinash Paliwal at University of London's School of Oriental and African Studies (SOAS) told DW that: "Wider Western sanctions will most hurt the people of Myanmar. The military elite will continue to have access to international finance and capital via China. This happened earlier too — and shall happen again if the West imposes stringent sanctions."