An Omani’s journey to inspire across borders 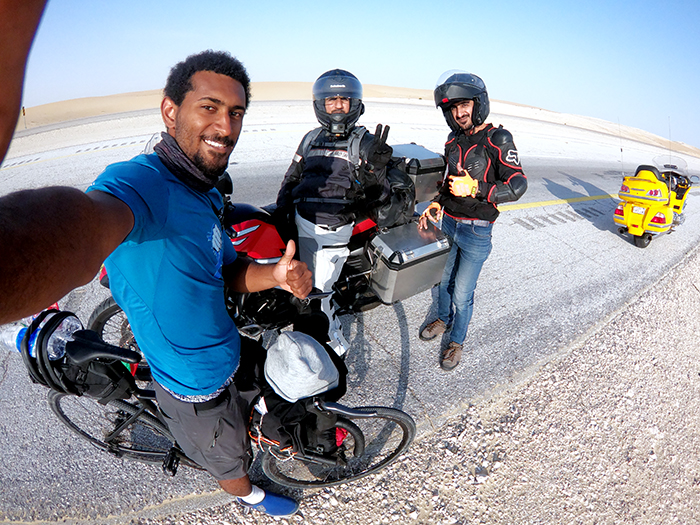 A year after Hamdoon Al Hashmi made a gruelling trip on his bicycle across the Arabian Gulf to raise awareness for diabetes, he wants to undertake the same journey by sea, and has spent the last 12 months preparing for it.

“I’m currently taking a break from such journeys, and have only been undertaking short excursions in Oman’s mountains for about a year, until I finish my university studies,” he says. “Last year was a difficult one for everyone, so I felt it was the right time for these activities to take a backseat.”

Referring to the coronavirus pandemic, he adds: “once all this is over, I look forward to making the switch from cycling to ocean-based activities, as I’ve become inspired by the naval and seagoing activities of my people.

“I will start learning to sail by kayaking, and once I’ve gained knowledge of that, I will move to sailing, which will help me understand the sea,” Hamdoon says.

Irrespective of the surface he’s on, or his mode of transportation from one place to the next, all of the Omani national’s expeditions have two things in common: raising awareness towards staying fit and healthy to keep diseases at bay – a very important practice these days – and forge lasting connections with people based on the similarities that all of us share. 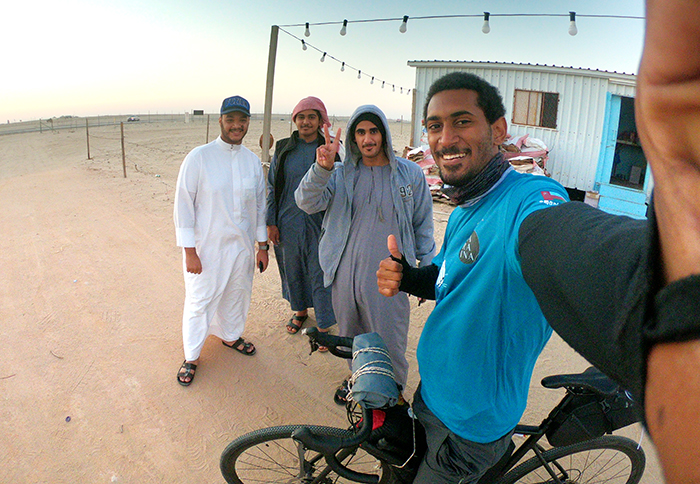 His last journey, which began on 27 December, 2019, spanned 1,700 kilometres, and took him from Kuwait to his homeland of Oman, via Saudi Arabia, Bahrain, and the United Arab Emirates in just over two weeks.

“This journey was not just about me cycling: it is about developing relationships with people I don’t know, and forming stronger bonds of community, wherever they may be from,” he recalls.

On his quest across Arabia, Hamdoon and his trusty bicycle would often cross more than a hundred kilometres at a stretch, before stopping for some food and water – if he was lucky.

“There were parts of this journey where I had no cell phone service or any other kind of facility for up to 120 or 130 kilometres,” he says. “These distances made it all the more challenging. Sometimes, I would find abandoned petrol stations on the route.”

Naturally adverse conditions, such as sandstorms and the baking heat, and external ones such as a dearth of shops from which to buy water, or even a toilet to relieve himself, were not all Hamdoon had to face. Thirst, one of man’s worst enemies in the desert, and injuries that flared up because of spending so much time in the saddle also impeded his journey. But Hamdoon continued undeterred, stopping only to rest at night, and refuel and clean himself up when the opportunity arose.

“I carried with me only two pairs of clothes so I washed them and let them dry on my cycle,” he admits. “Wherever there was a place to wash, I’d take a shower, and at night, I rested wherever I could find a place, even if under the shade of a palm tree.

“In the morning, I got on my cycle again and continued my journey,” he reveals. “Sometimes, you will come across places where there are shower facilities for truck drivers and other travellers, so I need to make sure I spot these places so I can take a shower there. 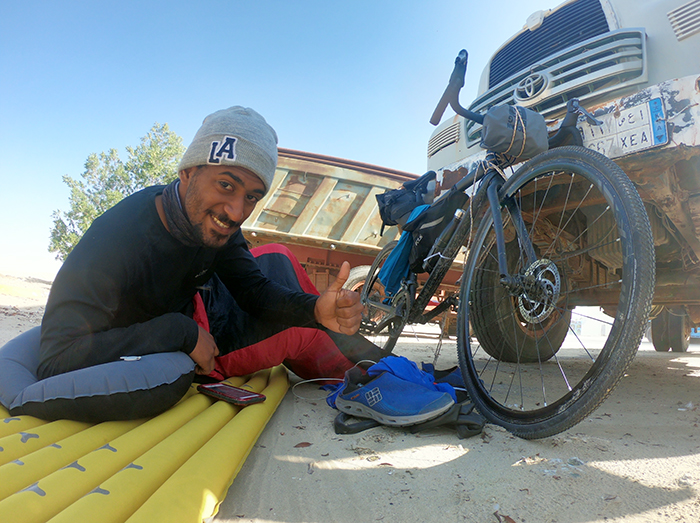 While Hamdoon would approach people to connect with them and help map his journey, the friendly and welcoming reputation of his country made others more approachable to him: the shirts he wore had a map of Oman on their backs, while his country’s national flag fluttered from his bicycle.

“The moment people saw this flag, they would approach me. They would automatically become friendly and interact a lot more,” he adds. “They would ask me things like where I came from and where I was going.

“Some of them would give me a few bottles of water and they would buy me food, others offered me a place to stay,” he says. “I want to thank everyone who has helped me on this journey. The first people I want to mention are my family: they know why I am on this journey and are happy for me. I want to thank all the people I met on the way, who helped me in whatever manner, great and small, in completing this trip.

“I have learned a lot of things from my journey. Never back down from a challenge when you are faced with one. Take a break to rest and refocus but don’t run away from your difficulties.” – [email protected]