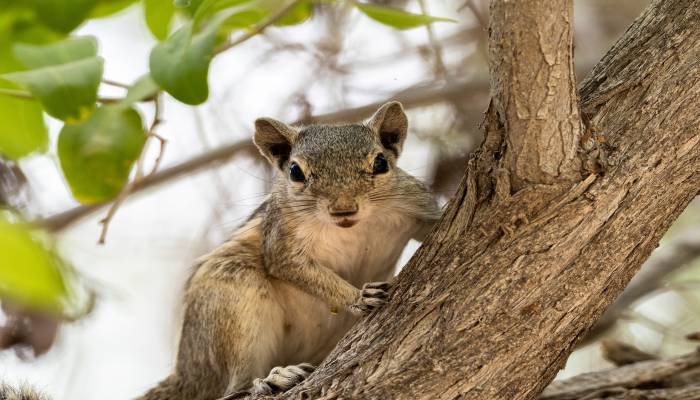 These squirrels are feeding on the fruit of jujube trees and may become serious pests affecting date palms. Photo:Supplied

Muscat: A preliminary study suggests that there may be an invasion of palm squirrels in Oman, which could seriously harm oman's date farming industry.

According to the study, these squirrels are feeding on the fruit of jujube trees and may become serious pests affecting commercially valuable date palms.

Funambulus pennantii is supposed to be the one species of squirrel to be found in the United Arab Emirates (UAE) with evidence of this three-striped Indian squirrel - Funambulus palmarum - in Ras Al Khaimah. But the study has recorded evidence of palm squirrels of the genus funambulus invading Oman for the first time. These squirrels have been recorded in seven locations in northern Oman contributing to a total of 11 records. Seven records were of the five-striped northern palm squirrel, Funambulus pennantii and species identification was uncertain for four records.

The researchers said, “Their numbers are low at present in Oman, but they are well established in the adjacent UAE from where sustained invasion is more than likely. At present, these animals can be sold through pet shops in Oman. These furry and cuddly animals are liked by pet owners, who may release them into the natural environment for whatever reason or the animals by themselves can escape from captivity. The invasion of Oman by the palm squirrels is in its infancy and strategies should be formulated now to eradicate/control them as a matter of priority.”

The presence and extent of the spread of these squirrels was first noted by Jamila J Hakam, a self-employed expert academic editor, spouse of Prof. Khaled Day, a computer scientist and an avid birdwatcher. During a walk in the SQU Botanical Garden  on June 16, 2020, at about 6 am, she saw a bushy-tailed, striped rodent on a branch of a Christ’s Thorn Jujube (Ziziphus spina-christi) tree near the ornamental pond. She observed it vocalising constantly for about 10 minutes. Based on an online search for its description and its vocalisation, Ms. Hakam believed that she had seen an Indian palm squirrel  and was concerned that this invasive species may be harmful to the botanical garden ecosystem.
Hakam again saw the squirrel in a different location in the botanical garden on July 12 and 22, 2020. Apparently, it had managed to survive for more than a month on whatever food resources were available in the garden. Dr. M. Barry, from the Department of Biology, SQU took photographs of this animal shown here on 17 July 2020 and its identity was confirmed as the five-striped northern palm squirrel.

The initial sightings were reported to Dr Erika Cuellar Soto, of the Biology Department, who in turn informed Prof Reginald Victor of the same Department who has been studying invasive species in Oman for the last two decades. Both these colleagues triggered an investigation into the invasive status of palm squirrels in Oman.

Dr Cuellar Soto has established a database for monitoring the distribution and population trends of palm squirrels in Oman and would appreciate receiving reports of squirrel sightings from Oman preferably with photographic evidence via e-mail at [email protected] The results of the preliminary study by Victor, R and Cuellar Soto, E (2020) was recently published in the International Journal of Environmental Studies (DOI:10.1080/00207233.2020.1811577).