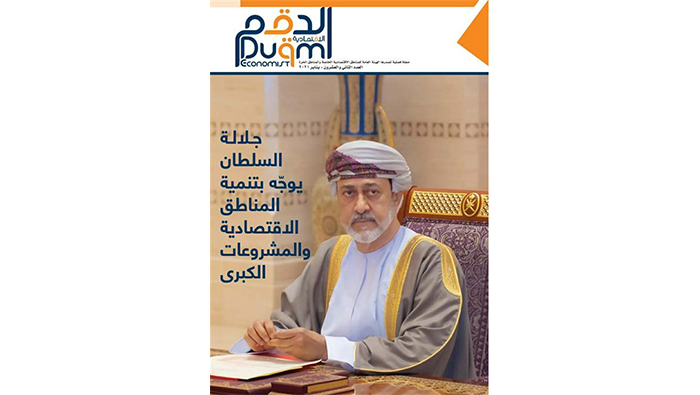 Having the picture of His Majesty Sultan Haitham Bin Tarik along with the title “His Majesty calls for the development of economic zones and major projects” on the front cover refers to the meeting of the Council of Ministers, chaired by His Majesty the Sultan on December 15 in which His Majesty approved the launch of Oman Vision 2040.

In the editorial, Eng. Ahmed Hassan Al Dheeb, Deputy Chairman of OPAZ and General Supervisor of the Magazine, stressed on the importance of the special economic zones and free zones in the Sultanate’s development plans.

He commended the various achievements marked over the past years.

“The recorded achievements marked all the zones an attractive destination for investors from within and outside Oman. Hence, this year OPAZ is planning to increase the gains made by the zones to the national economy,” Eng. Al Dheeb commented.

Duqm Economist Magazine dedicated a number of pages for the main story, titled “Duqm; a tourist icon amid a number of investment projects” in which 8 key tourist destinations in Duqm or nearby have been featured. These breathtaking landmarks include Rock Garden, Hamar Rock, Resorts’ Beach, where Crowne Plaza Hotel, Park Inn Duqm Resort, and other under construction projects.